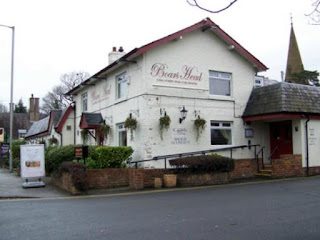 Not really being they type of blog that comments on the local pub scene, I don't usually so stuff like this.  But since I have some insight into what's happened, I thought I may as well.

Those of you who have ever been up this way will probably know the A6 well.  There's no motorway junction or any railway station between Preston and Lancaster.  The main reason for this is there is very little in the twenty miles between them.  When your main settlement is Garstang (population 8000), then you know you're not a high density area.

About three miles up from the junction between the M6 and M55 in Barton is The Boar's Head.  Originally a fairly standard Whitbread rural inn, Mitchells of Lancaster bought it after Whitbread divested itself of a lot of it's estate in the 1990s.  Last week, to some consternation, it was closed abruptly, Mitchells declaring it unviable.

I went there for about a year in 2012-13 as it was where my sister and her erstwhile boyfriend went at the time.  If nothing else, I was usually guaranteed a lift home.  If you have a look at the photo above, you'll see the extension on the left.  This is where the dining area was situated.  I rarely saw more than about 5 tables out of 30 occupied, except for the obvious Sunday lunch crowd.  The only times I ever saw it busy was on New Year's Eve 2012 and the previous November when my mother hired out the place for my Nan's wake (the empty space helped keep certain groups of the family apart, I heard).

In May 2013, the couple who ran the place quite, citing despair with Mitchell's lack of support and general idiocy.  A new couple were soon installed, and they place started to go downhill.   I went in one evening and ordered a pint that turned out to be vinegar.  The barman changed it, but didn't take the offending beer off.  He told me he'd been ordered by the new Landlady to get rid of the old stock by whatever means necessary.  I didn't go back.  My sister was barred soon after after being grassed up by the staff for slagging off the new regime behind their backs.

That was only the start, apparently.  The play area at the back (whatever you think of the kiddywinks, such things are fairly essential for a rural dining pub) was demolished, and visitors to the adjacent church were banned from parking there. Residents suspected it was a deliberate campaign to run the place down so Mitchells could sell it off, but you didn't hear that here, right?

Ironically, in 2015 Mitchells put in a new couple who knew what they were doing and there was an upturn in trade.  But so determined were they to close it, the new people were removed with 24 hours notice and despatched elsewhere in the estate.

As said, Barton is hardly a humming hive of activity.  It's local facilities are (1) a takeaway (2) a car dealership (3) an upmarket furniture shop (4) a restaurant and bar and (5) a hotel, which by definition the locals are unlikely to use.  If the Boar's Head becomes flats, as is the rumour, then it's a peculiar decision as 150 new homes are already due to be built in the area along with the new Broughton Bypass.  The local schools are already oversubscribed and the A6 is already busy enough.

Barton doesn't really need more housing, but presumably Mitchells have found a buyer willing to pay an acceptable price.  But if you want a drink, you now face a twenty minute walk in either direction to the Broughton Inn or the Roebuck in Bilsborrow.  I can only presume any slow tick of revenue from a rural pub is outstripped by a big hit of cash from a property sale (rumours are that Mitchells have large debts, which would explain their several site disposals in the last two years).

It could be the Boar's Head's offer wasn't good enough to attract paying crowds, but, sadly, Barton now joins one of the hundreds of villages in Britain who's last pub has gone.
Posted by Lizard Seer at 05:29

Email ThisBlogThis!Share to TwitterShare to FacebookShare to Pinterest
Labels: barton, boar's head, death of the pub