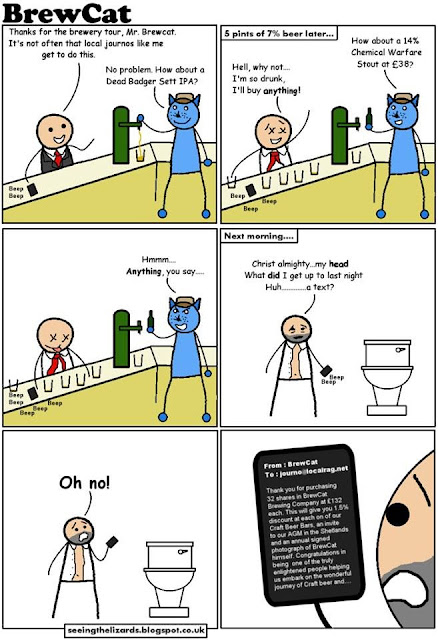 
There is a pub in Lancaster. It has a sign outside proclaiming a "Warm Welcome".  From what I've heard, the only warmth you'll get there is if you upset the clientele there, say by looking funny at their pint, and they set you on fire.  If anyone from Drinkaware wanted to prove the link between lager and fighting, this is the place they would go to.  It is "under new management".  Nothing has changed.

If this teaches us anything, it's always to be wary of pubs that have "Warm Welcome" displayed on the exterior.  If it's something they actually have to say, then it's doubtful it has ever existed.

And why do pub websites always proclaim things like "excellent home-cooked food" and "friendly service"?  In the majority of pubs, I've found, such things are barely true, if not downright lies. In fact, I would prefer it if some places were honest and said "reheated processed stuff from Brakes" and "surly and grudging service" :

<BARMAN grumbles and fiddles with sparkler, while dispensing froth that cascades over the glass>

BARMAN : <thumps down pint glass to dislodge inch of head> "Two ninety, and if you don't want another you can bugger off to the Bluebottle And Botulism down the road"


May not get the best reviews in Tripadvisor, but it would make a change if nothing else.

Some people say that British pubs would do better if they went the "table service and tips" way of the United States.  No doubt casual diners and drinkers would like it, but the average UK pub denizen is a miserable bastard who, if he's not putting the world to drunken rights with his mate or random fellow barfly, just wants to be left alone with his pint.  He doesn't want to be asked "Is everything ok?" every 20 minutes, because he knows damn well things aren't ok and never will be.

I'm afraid if you change pubs too much too soon, they will end up with Dandy Syndrome where every "improvement" halves sales at a stroke.
Posted by Lizard Seer at 14:40 1 comment:

Email ThisBlogThis!Share to TwitterShare to FacebookShare to Pinterest
Labels: death of the pub, service, truth economy

BrewCat Calls In the Pest Control 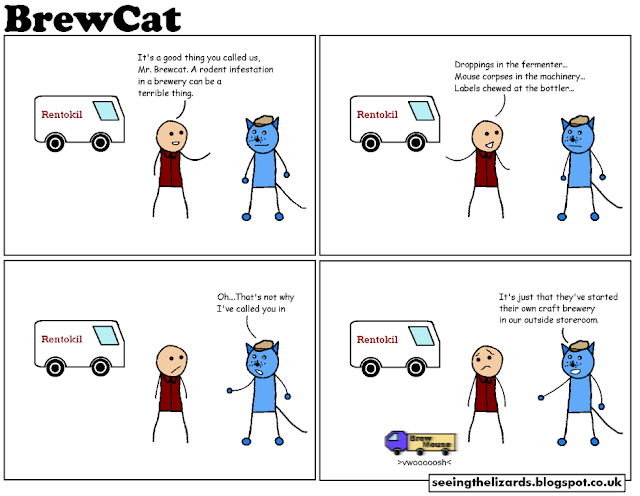 Normally, I don't have to worry about such things.  I go to the pub mainly on Sunday and Monday afternoons.  But on the few times I've actually been to a place with actual people in, this is what I've worked out about finding your own personal drinking spot.

(1) If you are a lone drinker, try to find the table/spot with the fewest seats.  While it's rare for anything to be said, you may get a lot of sideways glances if you're occupying the only table-for-four when two couples come in together.

(2) If all seats are taken, then you can stand up at the bar (or pull up a chair if one is available).  Though it's best not to engage the staff in too much conversation if you don't know them.  Best not to be seen as an inappropriate bore in a strange pub.

(3) And if you do sit at the bar, don't order food and eat it there.  Nobody wants to hear someone chomping away while waiting for their pint to be pulled.

(4) If there is an empty seat at your table, try not to dump your stuff on it.  Someone may require it (see above).

(5) If in a large group, try not to disrupt the pub's seating plan too much by moving tables together and purloining nearby chairs.  It will not look good, especially if you all are only in there for one drink.

(6) If no seats are available and the bar is full, it's best to leave.  Or have a swift half. and then leave.

I'm sure there are many others I've not yet experienced.  As in many things with human interaction, you only figure out something when you see it being done wrong. 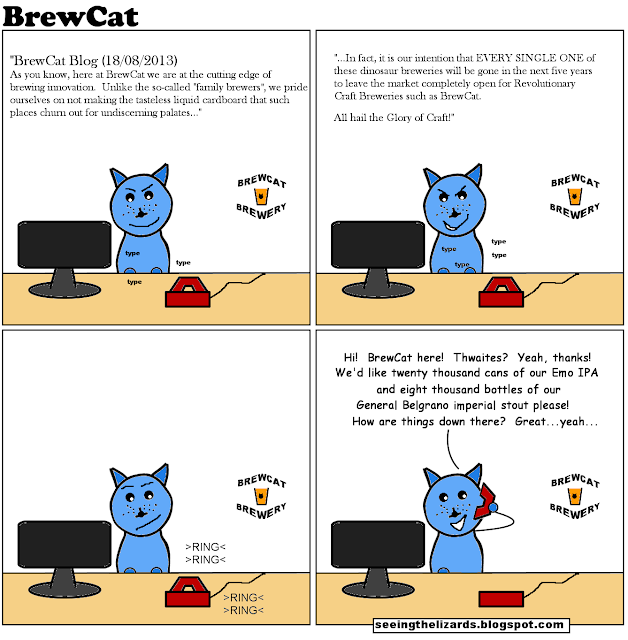 
Of all the "continental" lagers, none get on my tits more than San Miguel.  Whatever you say about Peroni, it is at least brewed in Italy.  It may not have taste, but it does have history.

In an attempt to give San Miguel it's desired image, here Scottish & Newcastle had that old beer ad standby - a sexy woman performing for a man's approval.  It's a good job I'm a beer blogger and not a feminist blogger.  You'd have to read paragraph upon paragraph of criticism of this one.

But for me, the most implausible part is the fact the dancer pours water on her feet, then drinks the beer.  In my experience, vice versa would have been better.  Water is more refreshing than SM and SM is generally served far colder.

Still, I'm grateful for Carlsberg UK's (the current owners of San Miguel) endless pushing of the stuff.  It gives me a chance to point out that this exotic, sun-kissed lager is made in the tropical climes of....Northampton.

The BBC published this today, about the rise of the smoke-filled beer garden since the implementation of the public smoking ban.  Though Rod Liddle, for one, assumes they will ban it eventually.  Even more ominously, New South Wales will ban smoking in outdoor dining areas in 2015, and New Zealand promises to follow suit three years later.  "Bloody hell," I thought "Mudgie will be up in arms about that.  And quite probably legs and other appendages too."

I'm sure it's a known fact that pub drinkers are more likely, on average, to be smokers than the general population.  Like their cigarette habit, they know the risks but don't particularly care about it. And if the smokers go completely, where will the pubs be then?

As I've said before, it's becoming much less socially acceptable to go to the pub for the sole purposes of drinking.  More and more people are staying in with their bottles and cans than going out for a few pints or glasses.  The effect this has on the population's sociability is a debate for another time, but many pubs are deserted apart from weekend evenings.

The way things are going, there will soon be only enough demand for one or two pubs in every town.  These will solely supply craft beers and real ales for beer connoisseurs, namely Beards and Crafties who will be only people who would dare to be seen out in public drinking.  And for the taste, you understand, not to get pissed.  The pub will effectively become the liquid equivalent of the tiny-portion gourmet restaurant.  With prices to match.

I ask this : Can you see any way to get people away from their computers, TVs, Chardonnay and Carling and back into the pub with others?  Personally, I'm having difficulty doing so.  Society in the past 35 years has become much more individualistic and, dare I say it, misanthropic.  "I will do what I want, and anyone else can just sod off."

The world appears to be changing, and sadly, we'll probably have to change with it.

Email ThisBlogThis!Share to TwitterShare to FacebookShare to Pinterest
Labels: beards, changing face of beer, crafties, death of the pub

Owing to an unfortunate lack of material here at Seeing The Lizards (possibly due to the resident blogger being always in the pub and/or too drunk to type) we have done the fashionable thing and engaged the services of a Guest Blogger - Johnny Whitepebble of Beer Traveller, the famed local blogger who travels the North West from pub to pub at the taxpayers' expense. We reckoned he should have something to say, anyway. Here's Johnny!
"I got up bright and early this morning. I had to take some photos of a pub 20 miles away because my readers are fascinated by buildings with signs on.

My first call of the day was the local Wetherspoon's. As ever the beer selection was appalling. Ruddles, Abbot, Greene King IPA. Do they have some agreement with them or something? We need to be told.  I couldn't get anything out of the bar staff, so I shall be writing to Tim Martin tomorrow. Eventually I chose Lancaster Blonde. Always drinkable.
After leaving quickly as suggested, I traversed the main road to the local brewery owned pub.  Perusing the pumps, I noted there was only a bitter, a stout and a mild.  Whatever happened to choice in this town? I told the manager the selection was slipping and bought a bottle of Lancaster Blonde. Always OK.
Swiftly moving on, I walked across town to the town's Craft beer bar.  Sadly, I was to be disappointed as the selection was 4 IPAs, an Imperial Stout and bottles of various 'saisons', whatever they are. I asked if they had any Lancaster Blonde and they laughed at me.  I left immediately and have sent an email of complaint to their parent company.
I finally arrived home after an eventful day very late at 2:30pm. I uploaded my photos and went to bed. It's good to have a hobby you enjoy, don't you think?"
Posted by Lizard Seer at 09:38 4 comments: