Remember the days when every man, woman, dog, cat and lesser spotted flycatcher had plans to open a micropub?  Seemed like back in 2018-19, they were closing small local shops and estate agents just so they could bung in a few tables, chairs and handpumps.  They were opening everywhere, and sometimes in locations which nobody could imagine such a business prospering in.

Now, Ashton-on-Ribble.  I really don't want to be too harsh on the place, as I used to work with several people who live there, but salubrious and well-heeled it is not.  If you see it mentioned in the local news outlets, it's unlikely to be for happy reasons.  But it had an empty shop unit, so a 'local entrepreneur' opened a micropub in it, during the otherwise unprosperous time of July 2020.  I checked it out at the time, note the 'micropub by numbers' decor and thought "Funny place to put it, but it should do ok as there's nothing like this round here."

I've often said that no matter what is attempted or intended upon opening, a new pub will quickly find its clientele and gravitate towards that.  And so it happened with the Tulketh Tap Room.  The signs that all was not well showed within a month or so of trading when it was reported for violating then-current rules on social distancing, something I also observed on my second (and to date, final) visit around this time.  Last summer, it even closed as it was having trouble getting customers to abide by the regs, though some were sceptical on how hard the owners were trying to ensure compliance.

Since the final scrapping of most COVID measures in July 2021, this obviously hasn't been an issue.  But issues are what keeps happening at Tulketh Tap.  If you talk to anyone about the place, you'll hear the tales of bar fights, lock-ins, drug dealing and mass brawls on the streets outside.  And most pub customers when upset with the service usually just complain to the management.  In Ashton, they put a molotov cocktail underneath the manager's car.

The local licencing authorities in Preston are not known for heavy handedness (if they were, probably half the pubs on Friargate would be on some kind of watch), but even they have had enough of the Tulketh Tap Room.  The licence is up for review, and few people in the know expect it to still be open next week.  And to be honest, it would not be missed.  It's not even the only micropub in the immediate area any more, though no doubt its existence has performed some kind of social service keeping certain characters out of the Tap End.

Though as the Tap End has been listed in the 2023 Good Beer Guide, the Tulketh Tap's probable closure has saved some unwary tickers an "interesting" experience if they haven't been following the Google Maps blue dot closely enough.. 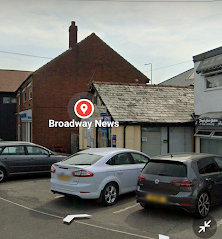 As unlikely as it may seem, there's Panic On The Streets Of Fulwood, an otherwise leafy and sonambulant suburb of Preston. And what exactly is the cause of this disquiet? A micropub. Or rather, a micropub that does not exist.

You may have read (on the internet, of course) that a lot of printed media will be extinct by 2030. The owner of Fulwood's only newsagent has read this too, and wants to convert his shop to a licenced premises. And the locals are unhappy.

If you've ever read the standard objections of residents to a new pub, or indeed anything that may change the "character" of an area, this will sound very familiar. Noise. Drunks. Cars. Violence. Cigarette ends. General undesirable characters. And aren't there enough pubs already?

Most of the objections are the usual spurious nonsense. Broadway News is on a road just off Garstang Road, the major northbound route to Junction 32 of the M6, so cars and noise are a given. Fulwood is mainly middle aged and middle class, so drunken violence is unlikely, and it's doubtful the so-called lower orders will walk from Plungington or Cottam to pay micropub prices for lager.  As for parked cars, it's pretty much impossible to park anywhere in Fulwood without paying or risking a fine or FPN.

It's true there are four other places selling alcoholic drinks within visual distance, but would another tip Garstang Road into chaos? Well, one's the local Indian restaurant and another is a fancy bistro. The other two are The Black Bull, an Ember Inn and Crafty Beggars, the local micropub. While the latter is a Pravha palace, a source of rampant disorder it is not.

So why the vehement objections? My view is it comes down to Fulwood itself.  As a resident myself, I'd hesitate to describe it as Nimby Central, but it's certainly odd as far as amenities go. There's no chippy, no takeaways and if anyone ever proposes building anything to solve the area's chronic parking issues, the locals have the plans firmly squashed. They just want the area to remain the same, for ever. This causes problems, and when it does, they want the problems sent elsewhere. Preferably the city centre or the less wealthy areas.

If the crowds at Crafty Beggars are anything to go by, Fulwood could easily support another micropub (the local alternatives being the Ember, a Sizzling and a Hungry Horse). It's true these are clustered together near the A6, but being overwhelmingly residential, the streets are too narrow anywhere else to locate a business with a reasonable amount of footfall.

For me personally, I'm more concerned that a newsagent thinks he can run a pub.