Beer lovers across the nation will be packing into their locals this Wednesday, as it will be this year's Tightwad Landlord day, a celebration of chiselling industry practices designed to increase the profit margins of pub owners.

"We've prepared well in advance this year" opined stereotypical Yorkshire miser landlord Barry Shortmeasure "I've ordered the extra-thick 'pint' glasses that only hold 500ml and I've refilled the empty Talisker, Grey Goose and Hendricks bottles with Asda SmartPrice spirits. I've removed the drip-trays from the pumps as an incentive to staff not to overfill. I've even given extensive training to make sure they say past-their-best real ales are 'meant to taste like that'

We'll be rolling in it by Thursday"

Hapless untrained student Muppet barman Mal E. Bew was asked to comment but apparently he'd knocked himself unconscious after slipping on the floor.


Implausibly pseudononymous bloggers/journalists/authors/freebie imbibers Bake and Bowley have declared a Golden ale taste-off on their website. "We had a bottle of Robinsons Dizzy Blonde and, to be quite frank, we were bored senseless." said Bake (female) "So we decided to order a whole case of blondes so we could see exactly how boring and dismal the whole Golden Ale scene is."

"Unfortunately," Bowley (male) carried on, as if in one mind with his partner "We found that every single one we bought tasted the same. Mild hops, mild malt, completely nondescript. Wainwright, Summer Lightning, Lakeland Gold, Bitter & Twisted, the lot. I think we even fell asleep halfway through. I don't think we ever got the post finished"

After the alleged roaring success of the microbar and nanobar movement, a London entrepreneur has launched his new Picobar concept onto an unsuspecting city.

Gordon Pieinsky, a burnt-out finance refugee expounded sweatily to us yesterday "What with property prices being so high in this part of the city, I couldn't afford even an old newspaper stand to sell beer from, so I bought this."

Sitting on his sole keg of Meantime Pale on Kilburn High Road, Pieinsky dispensed us a pint. "Customers today aren't bothered about thing like comfort, seating, and room temperature. They just want fine craft beers at under £6 a pint." he vaguely presumed while fiddling with the CO2 settings.

"I hope Allied Bakeries don't come and take those bread trays away, though. I'll be exposed to traffic, then."

There is an unending debate about what is and is not Craft Beer. It will never be solved. For one very good reason.

"Craft Beer" does not exist.

There is, basically, excellent beer, good beer, ok beer, mediocre beer, crap beer and awful beer. The size and ownership of the brewery in question has little impact on the quality of the product.  "Craft" as it stands today is just a tick-box list of the things a certain sector of beer consumers like and expect to see.
Microbreweries in London and elsewhere (but mainly London) are tripping over themselves to be the beardiest, distressed-fontiest and railway-archiest brewery around.  They proclaim about being wild and crazy dudes chucking hops and stuff into a bucket and somehow (somehow!) coming out with amazing beer at the end. The fact that brewing is an exacting and careful process, and the people behind the breweries are often refugees from IT,  Commerce and Academia is not mentioned. Because that wouldn't be "Craft".
Since the whole "Craft" ethos has been distilled down to a basic formula of "Craft" signifiers, it's no surprise the big brewers have taken them and made their own "Craft" beers. In most cases these are no better or worse than so-called "authentic craft". But the fact it's happening shows how easily done it is.

So, enjoy your beer. Macro or micro. Craft keg or cask. But remember that nothing is free of marketing and associated bullshit. Otherwise, stay inside and drink your homebrew.
Posted by Lizard Seer at 08:26 6 comments:

Since Boak & Bailey have discovered the apparent Holy Grail of Beer History - the recipe for Watney's Red - will they be writing another book soon?  Here's a little something to inspire them : 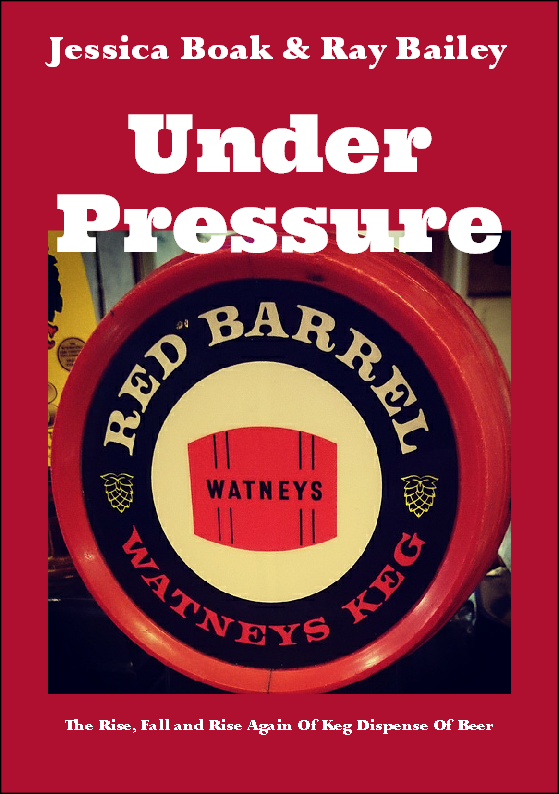 Humphty Dumpty had a Great Fall

If you're in a pub and see the man above,  do not approach him. Do not get into a debate about cask ales and NEVER a debate about being served a full pint.

My personal acquaintance with the Samuel Smith Brewery has been limited.  I once went on a day trip to Chester and did a tour of the city centre pubs.  Eventually, I chanced upon The Falcon on Lower Bridge Street.  Walking inside, I was bemused to see the kind of pub decor I'd not seen since the few times I was allowed inside licenced premises back in the early 1980s.  Looking along the bar, I failed to see anything I'd heard of.  "Hmm.  Well.  I'll havea pint of the Old Brewery Bitter" I thought "How bad can it be?".  I took out three pound coins in order to complete the transaction.

"One pound fifty", said the barmaid.

I'm glad I hadn't started drinking at that point, otherwise I'd've sprayed the entire bar area with brown Yorkshire bitter.  I had never paid so little for a pint, not even back in the last century when I started drinking.  I even checked the pump dispenser to see if I'd ordered a non-alcoholic beer by mistake.

It certainly wasn't the best beer I'd ever had, but I reasoned you get what you pay for.  Looking round, I realised there was not one single recognisable brand of drink, snack or anything else - a deeply unsettling experience in the 21st century.  I finished my pint and left for the Bear and Billet down the road, which turned out to be less unnerving despite being packed with Welsh Rugby fans.

Being me, on my way home, I had to find out exactly why these events happened.  I got out my laptop and looked it all up on the train home.  Yes, the Falcon was a Samuel Smith Old Brewery Pub and I found an independent forum that deals with the issues surrounding them.  To say the brewery owner is not positively depicted therein would be an understatement.

The most tactful way of describing Humphrey Smith is that he's a traditionalist.  He's inherited his family's brewery and runs it the way he wants to, as is his right.  Unfortunately, he doesn't seem to appreciate the difference between respecting the traditions of the 19th Century, and living in them.  Tales of him treating his pub managers like serfs, his pubs like a landed estate and technology like the sign of the apocolypse are many.  And woe betide you if you want any more beer in your glass than he's prepared to give you.

Humphrey will be 70 in December.  Rumours of his retirement abound, but it never seems to happen.  In fact, he's been taking more and more responsibilities at the brewery over the last few years, leading to many unsatisfactory practices, as described here in a flabbergasting article by one of his erstwhile relief managers.   .

In so many ways, this situation is a shame.  Apparently (I've not been in the Preston Sam's, The Ye Olde Blue Bell), Smith's pubs are a throwback to the days when they were all places of cheery banter, gossip and cheap beer.  Or so Mudgie says, and he'd know.  The SSOB bottled beers have been recently lauded by Boak & Bailey of all people (though they admit "Sam Smith's is not a trendy brewery. Nor even likeable")

The main hope of many of Sam's slowly dwindling group of fans is that HRW Smith goes before the company does.  His son, Samuel is apparently being groomed to take over, but is only 26.  I say, as many commentators do, that it's sad to see a company of such potential being slowly squandered by one man's intransigence.
Posted by Lizard Seer at 16:26 7 comments:

Commodity yellow pumpswill producer Anheuser-Busch InBev this week announced a revolution in American Pale Ales. "Craft brewers have had it their way too long." exclaimed dubious career-marketer Roger Backe-Stäbber "Only long established breweries such as us can make classic historical pale ales"

"First we take the most lovingly produced malt extract, and add the finest corn, rice, wood pulp and road-sweepings. To this we then add ICI Commercial Bittering Agent #34 and ferment it with our proprietary yeast. After this is completed we mature it extensively for 6-and-half hours before adding artisan-created carbonic acid gas. Then we cask it with some stuff to make it go a bit cloudy it and send it out to our retail partners, where it can be served right away"

You Can't Get the Staff Nowadays

The problem of recruiting and retaining pub staff has been highlighted this week.  Humphrey X. Ploiter, landlord of small-town deserted hellhole The Cock and Bull in Haythornthwaite, N.Yorks whinged to us "Honestly, with all these desperate student types about, you'd think they'd be begging us for work. The last young person we hired actually questioned me about their terms of working for three buttons and a half of Carling at the end while I sat upstairs and watched Game Of Thrones."

Incomprehensibly, this didn't end well. "She worked one shift," continued Ploiter "and then she rang in at 2pm Friday saying she'd found a job paying actual money in sociable hours."

"Kids today expect it all handed to them on a plate. Little bastards"

A local CAMRA committee member has sensationally blown the lid off the way in which pubs are selected for the Good Beer Guide.

Treasurer of South-East Grizedale Branch Greg Steakbake explained "It's really simple. We look at who gives us the biggest discount. Here's the clever bit - then we don't go there! Instead we hold our monthly meetings in the other town pubs. Before we order our drinks we say, 'If you'd give me a little more discount I'll mention you at our GBG meeting in May.' We repeat this at every pub, and at the end we have a list of where we've saved the most money."

CAMRA Chairman Colin Valentine said to us in an unconvincing fashion "In no way do we authorise these practices. CAMRA suggests everyone goes to Wetherspoons and uses the vouchers."
Posted by Lizard Seer at 09:21 No comments: