The Lizards Year In Review

Yes, I know it seems peculiar to review 2017 in a blog that has only had three posts this year. But bear with me. I know this blog was on "hiatus" between January and December, but as those who know me know, I've not exactly been completely inactive.

After several bad experiences last year with beer blogging types, all of whom proclaim themselves as 'good people', I took them to task by bashing this post out in under an hour. I wasn't exactly 'shaking with rage' (as one infamous blogger would put it), but I was certainly pissed off.  I left it up for a few days without saying anything, just to check with a few people that I wasn't being oversensitive or just deeply unfair.  They reassured me I wasn't.  So I posted the link on Twitter.

Well, 1200 page views in under two hours indicated to me that it got a reaction.  I had to turn my phone to silent, as the people at work wondered why it was making so many "alert" sounds.  Most amusing were the replies insinuating the people whose unedifying behaviour I was criticising would be taking me to court for libel. 10 months on, legal action has yet to emerge.

After that, I laid low for a few weeks. Even the beer world's "top satirist" and evil monster needs a rest from opprobrium for a while.  I dabbled a bit with a new blog, Drinkin' The Evil Keg, a sort of A-Z of beer, pubs and what goes on in them. It petered out over the summer, due to my usual interesting times that happen during that season. Maybe I'll go back to it one day. Who knows? 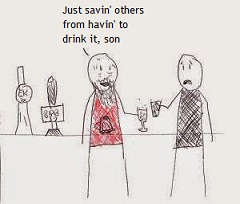 More significant for me was EvilKegText.  The story behind this was unusual, even for me.  I'd discovered the blog of former Teletext-type and current kids TV writer Paul Rose, and thought  "Why not do a Beer blog in the style of Digitiser, with fake ads, silly characters and other nonsense?".

I duly found a Windows Teletext editor and set about doing so. Luckily, I'd already been trained to create Teletext pages at school, albeit 26 years ago, so I knew what the medium could and could not do. It made for quick and easy updating, anyway. Apart the from the graphics, where you have to personally select every pixel.

Again, this ground to a halt. Personally, I blame the lack of news to make fun of in the Autumn. But it was obvious that some people weren't fans of me because of it. One brewery director took to her business Twitter account to call me a "fucking prick" because I mocked one of her friends.  Another prominent beer blogger gave me grief on Twitter, saying I should be grateful one of my targets was understanding enough not to sue me. Yawn. Stop me if you've heard this one before.


Naturally, I immediately did pages mocking them.  I may not do the fights and arguments that a lot people spend time engaging in on Twitter.   But don't expect me to keep quiet and simply take whatever's thrown at me.

Eventually, the tide of idiocy and smug, self-regarding narcissistic nonsense in Beer fandom proved to much for even this semi-retired piss-taker to endure. So, one day, I sat down in the pub and wrote my 59th "News In Brief".  I mean, I had to.  If you'd seen the same as I had, you'd do the same. Wouldn't you?

As the song goes -

Guess who's back
Back again
Shady's Back
Tell a friend