I was in the pub the other day. Surprising, I know.  I was drinking my way as usual through the local microbrewed ales.  Once I got to the end of the pumps, the barman flipped around the (hitherto hidden) far pumpclip to reveal something called "Silver Lining".  It did not look too convincing, being as it was an faded inkjet catridge effort, laminated and roughly cut out.  This was, apparently, the Festival Beer of the Lancaster Beerfest.

"As the pub company's one of the Beerfest's sponsors, we've been told we have to have this on." winced the barman.  "Oh, and Fuzzy Duck have done it." 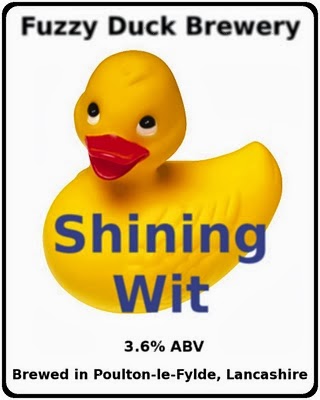 Ah, Fuzzy Duck.  If ever there was a less hip Lancashire microbrewer, I have yet to see them.  Not content with the dubious spooneristically named beers, and Syd Little running their pub restaurant in Fleetwood, the damn duck on the pumpclip is, in fact, smooth.  Their beers do very well at Festivals though.  I can imagine someone with next-to-no beer knowledge entering the hall with the programme and being baffled by the choice of 100 ales.  Then his eyes alight on the entry for Fuzzy Duck's beers.  "Cunning Stunt!  Hur hur hur!" he will chuckle to himself, as he rewards himself with a pint of Poulton-le-Fylde's 'finest'.

Anyway, eventually the bloody Silver Lining had to go on, as two of the other beers ran out that afternoon.  I decided to order a pint of it due to lack of better options (to be fair I'd had six pints by now).  I tasted it.  Or at least I would have done if I'd been able to discern any flavour in it.  Full of watery goodness, I thought, as I tried to dispatch it with reasonable haste so as to be able to drink something better.

I was about halfway down when a group of four blokes entered the bar.  These, I was informed, were the organisers of the Lancaster Beerfest, out on the piss and (of course) checking the Festival Beer was being served.

"Anyone tried it, yet?" one of them asked.  The barmaid, well-meaning soul she is, pointed towards me.  "He ordered one a few minutes ago.".  Hmm.  Thanks.

"How are you finding it?" enquired Mr. Beerfest of me.  Well, I took a deep breath and gave (to my slight regret) My Honest Opinion.  "Well, I'm guessing I'm not really your market for this kind of beer.  I'm more into this stuff <pointing at the Hawkshead IPA>.  It's not horrible beer by any means, it's just that I prefer my beer with a bit more oomph.".

Mr Beerfest slunk away without reply.  "I think you've hurt his feelings" said the barmaid, just to make me feel better.  "But he did ask me what I thought, right?  And if you don't want to risk hearing something you don't like, then you shouldn't ask the question."  She didn't reply, but simply looked doubtful.

Was I wrong?  I tried my best.  I could have said "This beer is crap and I'm trying to finish it as quickly as possible.  I gave it a chance, but found it severely wanting".  But no, I tried to be diplomatic about it.  And anyway, it's not as if Mr. Beerfest brewed the beer himself.

So, should you really give Your Honest Opinion when asked by someone whether you think their beer is any good or not?  Answers on a postcard.  Or rather the comments section below.
Posted by Lizard Seer at 14:08