Beer and Pubs - A Personal History 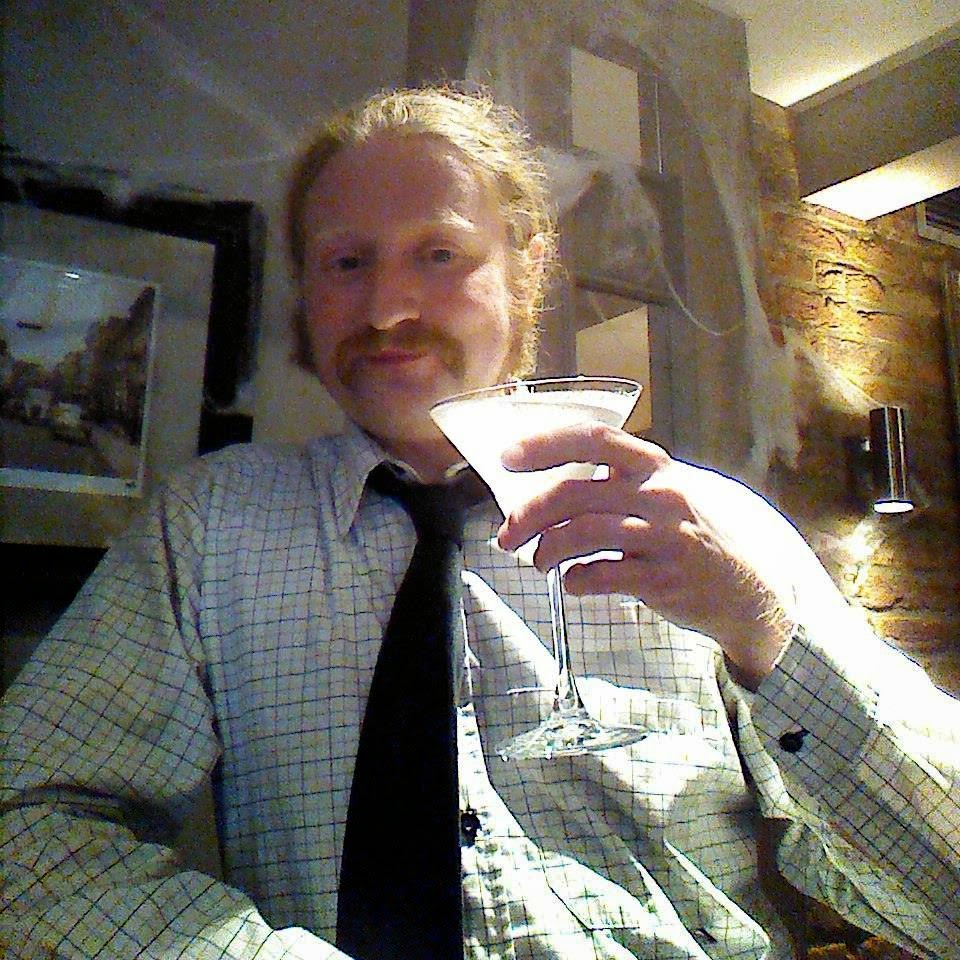 I’ve never claimed to be the typical beer blogger.  It’d be odd of me to do so, as I know I’ve never been the typical human being.

Reading many blogposts about the apparent formative years of your average beer blogger, it’s always struck me “Was life really like that for other people?”.

Most seem to have been introduced to alcohol by their parents, then progressed to the furtive world of underage drinking in parks or simply robbing the drinks cabinet while their parents were out.  Another typical story is being introduced to Real Ale (or its equivalent) at University, and progressing along the Crafty Route with their College Friend fellow travellers.  Then they find they need to share their thoughts with like-minded people.  And the way that’s done these days is via The Blog.
My life was never like that.  But then my life was never like anyone else’s.

I almost never drank as a teenager.  Certainly not with friends.  I never had any.  I lived in my bedroom, typing various fanzine (remember them?) articles and letters (remember them also?) out while consuming coffee and Pepsi Max in an effort to stave off impending depression and imminent academic failure.  No, I first started my drinking career in earnest back in 1997, when I left home.  Just to show exactly how long ago this was, I bought my own home on a supermarket night shift worker’s wage.  My tipple of choice then was Lambrusco or Bulgarian Chardonnay.  They were cheap at Asda.

Lacking the typical formative drinking experiences, I never got the taste of beer.  It took concerted effort at the age of 24 to even drink Stella or Staropramen.  As a great man once said, by diligent application, I learned to like it.

The pub was an alien world to me.  I went a few times as a child, or more to the point sat outside or in my grandad’s Ford Granada Estate which he used to crawl around the pubs of rural North Lancashire. One presumes the Police were not on the lookout for that sort of thing in the mid 1980s.  I was never taken to them by my parents, as they thought such places were not the places children should.  Or maybe they just wanted to get away from us.  But even then I was aware of the power alcohol had over people.  When my father had one of his infrequent pub excursions with friends or workmates, my mother always warned me not to irritate him after he came home.  Which was odd, as he always seemed to find me less annoying when he was drunk.
When I was in my 20s, I tried the pub experience by myself to see what all the fuss was about.  My local was just up the road from my house, The Oxford Arms in May Bank, Newcastle Under Lyme.  It was a Bass pub back then, and was shabbily decorated with a “Sports” theme.  I went in once on a Monday afternoon.  It was deserted (despite what the likes of Mudgie will say, pubs were never that busy on Mondays back in 1999).  I read the paper while drinking 5 pints of Stella, followed by a JD chaser.  As I recall, there was only one other drinker there, so there were few people to take exception to my seemingly odd behaviour.  Counting my money afterwards, I realised it was cheaper to drink at home.

After that, I restricted my out-of-home drinking to a couple of drinks in the Hogshead (Whitbread’s 1990s attempt at a JD Wetherspoon), after buying a couple of books at Webberley’s in Hanley.  I sat there.  I read and I drank.  I never spoke to anyone who I wasn’t ordering a drink from.

Your twenties, so I’m told, are meant to be the best time of your life for socialising.  It never happened for me.  Looking back at a distance of fifteen years or so, I probably missed out on what most people would consider a “normal” social life.  It didn’t seem that way at the time, though.  I was doing what I could cope with.  I would have been terrified if anyone had tried to engage me in conversation at the Oxford Arms or the Hanley Hogshead.  The beer, such as it was, was a means to an end, simply there to make me feel less anxious  about being outside in daylight. The few times I ever went out with other people usually ended badly.  I always found the places I was taken too loud and crowded.  This tended to culminate in embarrassing incidents, such as the time at my parents’ Silver Wedding where a taxi had to be called for me when I was found outside staring at the floor.  I don’t like noise and massed people now, but back then I was completely unable to cope.
I lost my job on the supermarket night shift when I was 30.  I couldn’t afford the mortgage, so I sold up and moved back home.  I’ve often asked myself whether the good that came from it has outweighed the harrowing times I endured while going through it.  Sadly, it’s one of the few questions that I genuinely cannot answer.

At first, I lived the same life I had as a teenager.  Though at least there was now the internet to make things a little less tedious.  I got up, I went to work, I bought wine, I came home, I drank it while surfing and then went to bed.  Usually later than I should have, but such things have always been a problem for me.  I had to give up wine in the end.  The sulphites were starting to give me heartburn.
-----------------------------
A couple of friends used to take me out around my birthday around this time.  I was unsure of the reasons, but it got me out of the house.  In 2010, this happened to be a beer festival on the Flag Market in Preston town centre.  It was the 21st of December and minus 2 celsius.  You had to drink to keep the cold out.  I tried a few beers, despite it being about 95% Real Ale.  I eventually got to the strong stuff.  Captain Smith’s from Titanic Brewery, 5.2%.  Well, I thought, I’ll pay tribute to Stoke here if nothing else.  I was surprised when I enjoyed it too.
Sadly, Captain Smith’s was a rare sight in Preston.  Whenever I had to go back to Stoke to see family, I made sure I spent more time in Titanic pubs than with my actual relatives. Far more tolerable, and far less awkward, I thought.  Drinking my way through Titanic’s range (Steerage, Anchor, Iceberg, White Star etc.), even I eventually realised that Real Ale, despite being the stereotypical drink of fat, bearded, middle-aged men, had far more diversity of flavour than the mass-market lager I usually drank.
It was after one of these “holidays” where, after work, I bought my usual bottles of Krombacher, chilled them in the fridge for an hour and poured them out.  They now had no flavour.  None whatsoever.  I realised I would have to start drinking something else.

But where to get decent beer in Preston?  Not having grown up here, or knowing much about beer, I had no clue what was good or bad.  One day, though, my father brought home a copy of the town’s greatest comedy publication – the local CAMRA magazine “Ale Cry”.  Once my eyes got used to the garish colours and appalling layout, I perused the articles.  One was about The Black Horse, a historic pub in the town centre.  It had just undergone a £400,000 refurbishment and was now stocking, yes, Titanic beers alongside the usual Robinsons range. Yes, I thought, this would be a good place to start.

So, the following week, I went along to the Horse.  And there was Titanic Iceberg behind the bar.  I ordered a pint, but it ran out three-quarters of the way down.  At least I got it for free.  Still, plenty more where that came from.  Or that’s what I thought.  Because in the following weeks, whenever I went into the Black Horse, Titanic was only noticeable by its absence  (I later heard that Robbies had pulled it off the bar because it was outselling their own beer 3-to-1).  Having paid for the bus, I usually stayed and drank something else.  Usually the mild, as it was the weakest and I could drink more.
I believe this is the kind of thing every serious beer drinker should do.  Just as you cannot appreciate happiness unless you have known misery, you cannot appreciate flavoursome beer unless you have drunk a standard regional brewery mild.  I’ve always been grateful to Robinsons Brewery for this, because I now know that however weird, disconcerting and sometimes downright awful some craft beers can be, they will at least be more interesting than Robinsons Mild.

I’m not young any more.  In fact, I’ll be 39 a week on Monday.  As a result, it’s quite anomalous for me to drink in pubs now, as pretty much everyone I know in them is under 25.  Being studenty places, Preston and Lancaster tend to aim for this market quite a bit.  I’m often quite conscious of my age and lack of education, but it’s usually surmountable, even if the young’uns and I do get irritated with each other sometimes.  I’m not yet quite old enough to join the Best Bitter drinking curmudgeons in the dark pub corners saying how everything was better in my day.

I’m better at conversation than I used to be.  If nothing else I’ve learned to use my naturally inappropriate personality for humorous effect.  Drinking good beer helps.  That and discussing the activities of the various other patrons and barstaff gives me something to do.  Even though I still have some rough times (not helped, I’m unhappy to relate, by drinking more than I should sometimes), the rough and the smooth are usually in equal proportion these days.

I’ve not had the typical beer blogger journey towards expressing my thoughts online to the world that cares to read them.  I’d like to think this makes me more interesting, or at least a bit different.