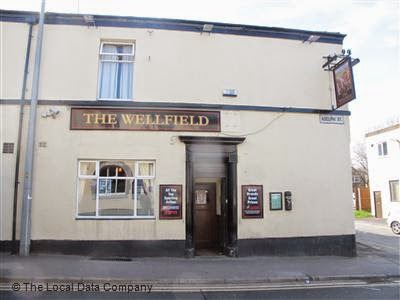 It's a quiet Sunday afternoon in Preston.  For once, the sun is out, and people have found better things to do than sit inside a pub. Not me. As usual, I'm in the Moorbrook drinking the latest silly craft IPA IBU nonsense.

There was a couple walking behind me down Garstang Road, and they followed me into the pub. Not for them the immediate drinks order on being greeted by the landlord. No. The most important thing they want to know is "What time's the football on here?" Needless to say, the Moorbrook doesn't have Sky Sports.

After a brief conferral between them, and old boy sat at the bar piped up and told them that the game was being shown in a pub 200 yards away - The Wellfield on Adelphi Street. Formerly a Greenall Whitley house, this is now a Sports Bar, catering to, shall-we-say, Preston's more down-to-earth element. It is keg only.

While I am of course sat here drinking keg beer, this IPA is not the sort of thing served at the Welly.  Lager, Smooth and Guinness rule there. I have never been, as such things would attract comment from both the existing patrons and everyone who knows me and my usual tastes.

I remember a discussion about this on Twitter the other day. How many, it was asked, pubs are keg-only (the non-craft type, that is).  For all their many and myriad faults, CAMRA Central Lancashire helpfully provide a list for our perusal on their website.  Many of those listed as having "No Real Ale" are student/fun pub places (Popwold, Beachcomber, Oblivion); others are chain theme pubs (O'Neill's, Roper Hall). These places would never do Real Ale, as either it's not what the company does, or it's aimed-for clientele would never buy enough of it to make it worthwhile.

This leaves the old-fashioned keg pubs.  The places for whom the Real Ale and Craft revolution has somehow passed by.  They are either terrifying (The Bears Paw, The Golden Cross) or dumps in an endlessly repeating open-close cycle (The Black-a-Moor Head, The Tithebarn).  I'd say these types comprise of about 10% of Preston's pubs.

The keg-only pub is reckoned to be the kind that has suffered most over the last 15 years, as it's traditional drinker has either been seduced by cheaper supermarket beer, or put off by the smoking ban (the working classes are statistically far more likely to be smokers even now).  That any are left at all is suprising. None are highly regarded. Not by the middle classes, who see them as hotspots of drunkenness, lassitude and criminality. And neither by the discerning beer drinker, who regard them as dens of crap beer being sold to idiots.

I'm probably just as guilty of this, as I'd never be seem dead in The Wellfield or The Moor Park. But it can't be denied that a certain sector of the drinking population feel more comfortable in them than in a CAMRA or Crafty pub. What for them when the traditional keg-only pub finally disappears?
Posted by Lizard Seer at 06:59