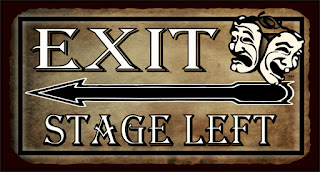 We're entering the last few hours of a somewhat eventful year.  What your opinions are on this will vary according to your political outlook and personal tastes.  Unlike some bloggers, I don't use this as a forum for saying how wonderful/awful things are, and chastising those who disagree with me.  But, nonetheless, I've made a few decisions in the last day or so, and the evening of 31st December is a good a time as any to say them

I'll be taking a break from this blog.  Things have got rather heated in the blog/twittersphere in the last month or so, and I think it would be best for me personally not to be involved in them anymore.  Like any fandom, the problem is a perennial one - people taking something that should be fun with a degree of seriousness out of all proportion to it's relative importance.  Anyone who's read this blog for a while will know this is one of my pet topics, and for the moment it has me entirely beaten.  You may see me on Twitter, you may not.  But it's unlikely I'll be contributing to any debates about beer or related topics.

I won't be going to the The Manchester Beer & Cider Festival in 3 weeks.  Said online unpleasantness has dampened my enthusiasm for such things.  I would find it too awkward and stressful to have to deal with any arguments, either overt or covert, that are likely to occur when certain people meet.  As I've said before, despite appearances to the contrary, I don't thrive on vicious backbiting, poorly thought-out insults and general controversy,  Sometimes discretion really is the better part of valour, and as such I withdraw gracefully to the sidelines.

I'll be back.  I don't know when.  Enthusiasm is a deep well, but once it's completely drains, it takes a long while to refill itself
Posted by m.lawrenson at 10:42

Email ThisBlogThis!Share to TwitterShare to FacebookShare to Pinterest
Labels: atyical, goodbye for now