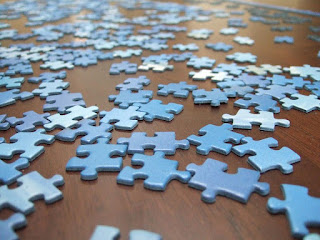 So, if my life and experiences are as I described in Part 1, then why do I do what I do?  Or, more specifically, the way I do it?

Blogging and Twitter are easy, and as such I've been doing them a long time. I sit alone and type. Easy, right?  Whereas sometimes the consequences of what I've written can be difficult, the actual act of getting the stuff out there isn't.  This is a way for me to put my point of view across, and if it wasn't there I doubt I would be able to do it.  This is where the stereotype of the "angry autistic" comes from - the inability to get what you think and feel across to other people. It builds and builds until it gets to the point where you explode in rage.  Even though I'm diagnosed as being more "high-functioning" (as the literature puts it), this does happen to me on occasion, though I usually try my best to remove myself from the situation before it becomes noticeable.  But in the main, I do very well at this, even though it may not come across that way.

Beer-related events I do fewer than I used to, mainly due to the energy required to do so.  Whereas most people, when put into a noisy and crowded situation with no obvious direction, can simply filter out the "unwanted" stuff and concentrate on the matter at hand, I can't do that.  I have to manually process everything around me, try to push the "unwanted" stuff to the back of my mind (where it still is, trying to get out), and work out what I'm supposed to do.  It's sometimes taken me half-an-hour just to get inside a building where an event is taking place. And once I'm inside, the whole process has to start again.

I know that some of you have seen me and introduced yourselves to me at various Beer Fests over the years (and let's face it, with how I usually dress I'm easy enough to spot).  Many people have seemed nonplussed when I look startled as they introduce themselves to me. This is because I'm still in the "processing" stage of trying to orient myself to the surroundings and I've just been given something unexpected to deal with in addition to this.  My conversational skills are not great in the most ideal of circumstances, so it's unlikely anyone's going to get a great deal from me.  I've been told that people are wary of me due to my "beer blogging's greatest monster" reputation and are surprised when I'm more anxious and less obnoxious than they've been lead to believe. All I can say is that, usually, things are rarely what people expect them to be.

I will never be able to be part of a "gang" or a "scene" or group of beer people charming their way into recognition and "fame" (such as it is in the beer world).  Networking isn't something I'm able to do, and this has probably hindered any progress I've made over the last 5 years or so.  I have to work with what I have.  And what I do have is the ability to see things in a different way to most people.

My autistic brain has no time for what it sees as "irrelevant" social details.  Whereas this can make me appear clumsy and rude, I can usually size people up fairly quickly, if for no other reason than they can't use their "preprogrammed" social interactions on me.  This, as you'd expect, has led me to feel a certain degree of cynicism about the human race. More specifically, about the massive gap between what people say they want and do, and what they do in reality.  Such is the mindset of the chronic piss-taker, and as such explains 80% of this blog.

Whereas I don't like arguments and conflict, I have no problem speaking my mind.  As someone who had great trouble communicating as a child and teenager, I now have a way to do it.  I would never wish my early life on anybody, but it has given me a certain set of skills in dealing with life.  Even if they seem bizarre or baffling to anyone else.

So, this is what being autistic is like for me.  I wouldn't dream of speaking for anyone else as all experiences are unique. But for all those who think I'm a "nutter", a "flake" or a "complete prick", this is why.
Posted by Lizard Seer at 17:51