When Did It Stop Being Fun? 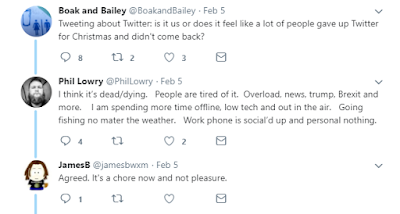 Prompted by the tweets above, the last few days I've been pondering, well, what the bloody hell happened to the online beer world while I was "away" (he typed euphemistically).  They're right.  It isn't as much fun as it used to be.  This has been a common theme on this blog for many years - I originally started it up nearly 5 years ago because I thought everything was too serious.

Sadly, despite my (and a few others) best efforts, the Serious Business of the online beer world rumbles slowly uphill.  A major reason is the increased Professionalism on social media.  Whereas once my Twitter feed would be dominated by people having a joke and a laugh about various beers, the brewers, the pubs and the other people online, now it's about Promotion.  There's THIS event going on somewhere; there will be SOMEONE there and there will be a PARTICULAR beer to drink there.

This, of course, is SERIOUS stuff.  This is someone's livelihood here, and social media is a way to get the word and the personal brand out.  That's all well and good - everyone needs money to live.  But for those who go onto social media to unwind and be irreverent, the constant in-your-face plugs can be wearing.

Such things divide the once relatively easy-going world of Online Beer into tribes.  THERE are the Brewers, THERE are the Beer Communicators and Authors, THERE are the Pub Bloggers and THERE, god help them, are the drinkers.  The occasional flaming arrow will be fired from one camp to another when someone gets irritated or upset, but mostly the tribes keep to themselves.

It's sad.  But it's a testament to the fact that social media has done far more to divide people than it's done to bring them together.