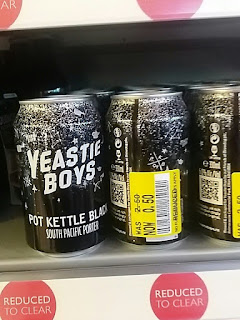 As many of you know, when I'm not pissing people off on Twitter or rapidly depleting Preston's supply of beer, I work in a shop.  You may or may not have heard of it, but it's reasonably well known in "beer circles" for its above-average range of beer (though I recall signing a bit of paper a few years back promising I wouldn't reveal online who they are).

Among my many duties, I'm the person responsible for my branch's range compliance, which (if nothing else) means I get to see what the shop will be stocking in the near future before the public does.  Over the last few years, this has consisted to me trying to fit in yet another line of beer that the Buyers have deemed we have to stock and rearranging the shelves as result (brewers - do you have to put your cans in cases of 24?).

Since Christmas it seems to have changed a bit.  Somebody somewhere has decided that 150 lines of craft beer is too many to justify, given the sales of 75% of the range isn't the best.  I already knew this, as I'm in charge of the date checking, and with a lot of them we only managed to sell about half the case before we had to mark them down.  Not helped, of course, by getting stuff with only 6 weeks shelf life on them.  Yes, I'm looking at you Camden and Five Points.  So, over the space of a fortnight, a quarter of the Craft range was discontinued.

Eighteen months ago, "Craft Cans" were a big thing, and any old stuff seemed to sell if it was packaged in aluminium.  But from what I can see, apart from the "usual suspects" (BrewDog, Beavertown, Magic Rock), they don't seem to be doing anywhere near as well as they used to.

Part of this is due to peculiar ranging decisions.  I'm sure the people behind US Breweries such as Crazy Mountain and Two Roads are Awesome Dudes, and Camden's beers are just as "good" as they were before AB-Inbev took them over, but are they really what today's forward-looking and novelty-hungry craft consumer is looking for?

Far too many Craft Breweries seem to do a very similar range of packaged beers.  Our buyer's tactic was to list the IPA, the Pale Ale and the Pilsner from each as we got them.  And, yes, if you tasted them back-to-back, you could probably discern some differences.  But what of the customers who have heard of "craft beer" and merely want to to try it?  What do they think when faced with 10 shelves of seemingly similar products?  Probably something along the lines of  - "Well, at least I've heard of BrewDog.  Punk IPA it is."

What with the well-reported news this week, it's probably dawning on people that are there are too many breweries turning out too much of the same stuff over and over.  What with only being able to tell a lot of them apart by their graphic design choices, it's easy to get get left behind when new stuff comes along, all Beer-Communicated and Social-Media'd.

Me? I've pretty much given up trying to follow it all.  Mine's an Oakham Green Devil, thanks.