As someone who is well known for working for a supermarket, I'm often called upon (not exactly "called upon", but that never stops me sticking in my oar on these matters) to explain and elucidate decisions made by the industry.  Whether it's the regular lack of 1 pint semi-skimmed at Stockport Morrisons on a Sunday, or the reasons why minimum-wage shop floor staff aren't trained up to be Awesome Beer Sommeliers, I generally can explain why.  It always amuses me how many people have strange ideas about how a supermarket works, or how their knowledge of retail process is stuck in the 20th Century.

Now that craft beer is expanding into domains where it was previously unknown, beer geeks are finding that sometimes, they will get a can or bottle that tastes past its best.  It could have been sent in short dated and not picked up; it could have been poorly stored in the distribution chain; or it could even been a duff batch to begin with.  Either way, the shop takes the blame, and standard practice is to refund and replace.  That usually satisfies the majority of customers.  But now there's Social Media, and every dodgy can or bottle can be indignantly exposed for the attention of the like-minded.

A few days ago, one tweeter decided to take Big Retail to task about why beer should be refrigerated in the distribution cold chain and at point of sale. Somewhat unwisely, a Sainsbury's social media dude replied to them. 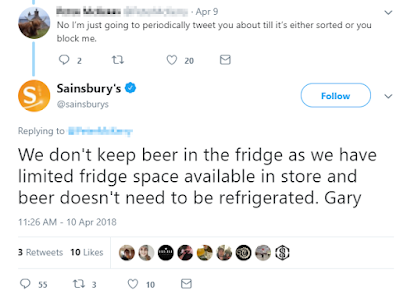 Oh dear.  Had Gary known anything about beer fandom on social media, there's no way he'd have said this.  Throughout the day, enraged beer types dogpiled the Sainsbury's Twitter account.  As often observed, one of the less attractive aspects of Craft Beer Types is their tendency to berate and insult people who disagree with them on a point of principle.  I wonder what the discussions were like that day within the Sainsbury's social media team? Poor Gary.

Amidst this unedifying spectacle, it was pointed out by several people (me included), that Gary (if he even exists at all, and isn't a product of personalisation software used by an outsourced PR company) is unlikely to be a beer geek and is probably unaware of the benefits that refrigeration provides for craft beer.  It's behaviour like this that gives fans of all things a bad name.

I'm closer to the shop floor realities of retail than Gary is, and I can explain why supermarkets don't, as a rule, chill their entire beer supply and display chain.  As stated above, this might be a revelation to those who don't work in my industry.

Let's look at the basic requirements, the fridges themselves.  A quick Google will give you some prices.  Here's a basic overview of the category.  If I took the shop I work in, just to buy the display fridges for our craft beer alone would cost in the region of £4000.  We'd also need additional chiller space in the warehouse to store the back stock.  Then we'd have to get them connected up, probably to somewhere where the pipes and wires aren't located (so more money spent there) requiring an overnight team of engineers for several days.  That's the fixed costs done, we'll say £12,000 as a conservative estimate, guv.  More stuff would mean more fees paid to our maintenance contractors.  And that's not even counting the electricity and gas required to keep the fridges running 24-7, 365 days a year.  Multiply that by how ever many stores you think a supermarket chain has and you get the idea of the spend required.

At the logistics level, the 200 lines of craft beer we do would have to be moved to our Fresh Food department, possibly requiring another unit to be built, but certainly more chillers would be needed to keep them cold.  For the deliveries from distributors who sell us both craft and "regular" beer, someone would have to separate them out by category and have the craft transported up the road to Fresh, where it would have be unloaded into its requisite picking slots.  Then the staff would have to be trained on handling beer and its dating idiosyncrasies.  This would likely cost in low six figures to achieve this.

And that would be for a small chain such as mine.  Can you imagine doing it for Sainsbury's with more lines, more stock and multiple distribution centres.  It would cost millions of pounds. And all to keep a few thousand internet beer geeks happy that their DIPA has been kept at 5 celsius from producer to display.   Have you read the headlines about retail performance recently?  Do you honestly think a supermarket chain would pony up that amount of cash to benefit such a small customer segment.  Do you?

In a way, the nerds are right.  Many beers would benefit from cold chain refrigeration.  But don't expect it to happen unless they're willing to pay an extra 50p a unit for their supermarket craft.  Well, they've been saying for years that beer is too cheap, right?