He Who Plays With Fire

Like most adults my age, I've made a lot of mistakes in my life, some with more serious consequences than others.  One mistake I seem to keep making is accidently winding people up on social media.  It could be said that Twitter these days is little but shouting, abuse, trolling and agenda-pushing.  I try and avoid all that, but whereas those things seem to be de rigeur, one thing that seemingly is not allowed is my main mode of operation - irreverence.

Recently, a new beer blogger was asking for advice on how to go about their pastime.  "Beer blogging?" I thought "Do people actually still want to do that these days?  I thought it was all about meeting fellow dudes in awesome places and taking selfies to put on Instagram."  But it appears at least one person still thinks it's a viable thing to do these days.  Of course, I made my usual mistake and gave the facetious advice "Don't do what I did".  You'd think that saying not to piss people off all the time by making fun of them would be sensible advice.  But no. 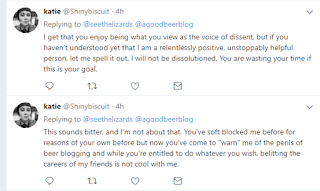 Well, that was me told.  Maybe it's an autistic thing, but I simply do not get how people read stuff like this into what I say.  Enjoy being what I view as the voice of dissent?  I thought I just wrote what I thought and let people judge me on the basis of that, but the clue here is in the use of word "being".  It implies I'm "acting a role" here, that I've created a persona that allows me to annoy people by being deliberately contrarian.  As anyone who's ever met me will tell you, I express exactly the same opinions in real life as I do online, and in pretty much the same way too.  I don't possess the social wherewithall or energy to pretend to be someone I'm not.

And belittling the careers of her friends?  Well, I'm not exactly sure who said "friends" she refers to are, but I can take a good guess - the Awesome Dude Blog Brigade whom I regularly make fun of.  They're an easy target, admittedly, what with their view that anyone saying something in the beer world is less than rosy is being treasonous by "doing the industry down", and their marked preference for pressing emotional buttons over reporting facts.  But "belittling"?  They seem to be doing quite well to me, and I assume their blogs get far more hits than this farrago of nonsense does.  If the ADBB feel threatened by anything I say here, it says more about them than me.

After all, this isn't really about blogging in the old sense.  Eighteen years ago, when I started, everything in the blogosphere was metaphorically all fields.  People started them because they were interested in stuff and wanted to share their views and connect with other people.  But now, it's all become very careerist - the thing on display isn't the blog's subject or even the views expressed therein.  No, the product is the blogger themselves.  "Look at me! I can both network and compose coherent sentences! Hire me for paid gigs!".

And that's why they don't like irreverence.  People's futures are being "risked" by a subject being seen to be less than serious.  Anyone who doesn't take things seriously must be dismissed out of hand lest they say something other than the accepted truth of the hive mind.  And that's why I end up upsetting people, usually by accident.

I think I may have finally learned the lesson here - Do Not Engage The Awesome.