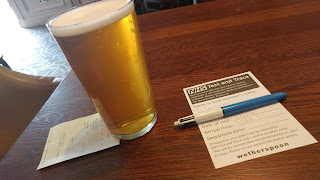 Turns out I didn't go to the pub on "Super Saturday".  Not because I was afraid of crowds or stray viral particles (I wouldn't have been able to work where I do for the last 4 months if I was), but because I went to bed very late, woke up even later, and then it was time for the IndyCar race at 5pm.  After which, I figured, it wasn't really worth going anywhere.  But I did go out Sunday.

As expected, it was a rather strange outing.  None of the pubs that I prefer to go to have opened back up yet, so I made up a shortlist of places I knew were open and, if necessary, booked at table.

My first booking was 40 minutes after I arrived in town, so I headed to the Greyfriar, the older of Preston's two Wetherspoons where I at least was reasonably certain there would be some free space.  I was greeted at the door as expected, and was asked "You were in last night, weren't you?".  Which was peculiar, as not only had I not been there since March, I was still wearing the face mask I had on for the bus journey.  Nonetheless, I was pointed towards the hand sanitiser (mostly pure alcohol) and asked to find an empty table.

Picking one at least 5 metres distance from everyone else, I logged into the app and ordered a pint of Punk IPA.  It duly arrived and, though I would like to claim that angels descended from the heavens while "Jesu, Joy Of Man's Desiring" played as I took my first sip of draught beer in 15 weeks, it just tasted like Punk.  I drained my glass over the next 20 minutes while listening to more explanations about entrances and exit from the door guy and the floor staff dealing with hapless wanderers.  So far, so typical.

My 1pm table at Wings & Beer Co. was waiting for me, so I traversed Friargate (noting the locked doors of the Black Horse, though I did discern cleaning activity going on inside, so some hope there at least) past the queue outside Wilko, the numerous either temporarily or permanently closed shops, towards Cannon Street off Fishergate.  Again I was greeted at the door, and yes, my name WAS on the list so I WAS coming in.  I sanistised my hands again and was taken to the same table Wings & Beer have given me on every visit over the last 2 years (I think it's their only table for 2).

After figuring out their ordering system (turns out you log on to an external website which takes you to a menu giving the "offer" of the place the GPS says you're in), I ordered more Punk and sat down for the next 2 and a half hours watching the football and Formula One, occasionally sanitising my hands with the provided bottle on my table.  It was a bit greasy, to be honest.  After my 2nd pint of Punk here, I decided to mix it up a bit.  Hey, if I'm risking my health here, I thought, I may as well be equally dangerous with drinks.  I ordered an Estrella Damm.  Yeah.

By the time I polished that off, my table slot was up and I decided to vacate it before I was requested.  Next stop was the Twelve Tellers, the "other" Spoons in town.  Here I was greeted by THREE members of staff, requested to sanitise my hands and was ESCORTED by a visor-wearing team member to a table at the far end of the building.  "I hope the app works this far out." I said.  Thankfully, it did and I got my first pint of cask since March 19th.  Three Bs bitter wouldn't have been my first choice for this, but you take what you can get these days.  I filled in the form I was given and had a couple of pints.  Say what you like about Timbo Martin, and I have, but his staff are very efficient and well trained.

Upon leaving by the designated exit, I dropped my form off in the box and headed off to the bus station.  Looking up Church Street, I saw Ye Olde Blue Bell in the distance.  Closed, of course.  They must be needing the extra time to put up all those extra Humphrey Smith-mandated notices about social distancing, masks at the bar and price increases.  If all this is true, I expect the place to be boarded up by September.
I put the mask back on, boarded the deserted bus back home (seeing on the journey the folorn-looking Plug & Taps with boards on the windows - one day, yes, one day) , and decided to stop off at the Black Bull for a final pint.  This is an Ember Inn and expectations were duly set to low.  Here, the sanitiser was squirted unprompted into my hands (it smelled of tequila, oddly - I'm becoming quite the connoisseur of hand sanitiser now) and I was given what amounted to a guided tour of the pub, being admonished because I started to queue before the guy had finished.  Noting only one handpump on, I ordered another Estrella and went to sit outside.  It was quite breezy, but not cold.   Looking across the A6, I could see Fulwood's new micropub (opening later this week, or so they say), and thanked the deity of your choice that there will soon be better options here than this place.

When I got home, I pondered the day and "the new normal".  As my usual haunts were all shut, I didn't have a single conversation with anyone as I didn't see anyone I knew at the 4 places I visited, so if it's going to be like this every time, I doubt I'd go out often.  And the queueing and app ordering?  Well, could breweries with deep pockets pay extra to get themselves up to the top of the app's beer list or have a really prominent display in the queue area for people to look at while they're in line? It would explain why I had two pints of Estrella that day. And how long will people put up with movement restrictions if they're no big spike in cases?  Will things just gradually shuffle back to how they were in time?  These are questions that aren't going to be answered today, but will be soon.

But on the bright side, my hands have never been cleaner.