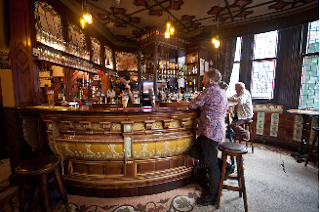 Further to my post on Beeching The Pub, I had another idea about this.  After the Government shut a load of lines based on Beeching's findings, several of them were opened as "Heritage Railways", where for a premium price, rail enthusiasts could experience Britain's inefficient transport past as they chugged along at 30mph on a steamer from an obscure place to nowhere in particular.

What with all these old pubs closing, surely some could be acquired at a knockdown price by a Pub Preservation Society and run as tourist attractions?  Yes, we too could see how our forefathers drank and all the attendant inconveniences and discomforts that went with it.  You could exchange your oh-so-soulless modern money for replicas of old British coinage for a truly authentic experience of hostelry history. 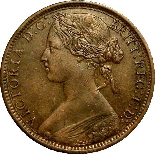 With polished brass, but a filthy carpet, this tavern would give an experience recognisable to a worker from the mid-Victorian period.  The ale choice would consist of Porter and Pale Ale, Porter being half the price of PA.  You would be surrounded by actors playing the parts of ladies of questionable virtue and shabby men in the final stages of consumption.  All would be heavily drunk, though on the spirits rather than the ale.  Great acting would be required as the whisky would be made from cold tea, creosote and surgical spirit.  For an additional fee, the customer could be robbed and left for dead after an unwise drinking session. 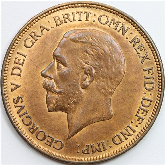 Bare floorboards, and lots of mirrors.  Echoey, but better than sobriety.  There's a depression on, you know.  Two handpumps will be on.  They will be marked "Bitter" and "Mild".  Mild will be a penny cheaper.  If you are a woman and you enter this place, the actors (all male) are trained to stare at you long and hard before directing you to the "Ladies Suite" where you can nurse a gin & bitter lemon until your man is suitably sozzled.  Hats and jackets to be worn in the Lounge Bar at all times, but in the public bar you can be in your underpants as long as you keep drinking and paying.  And you most probably will be if you try the Bitter. Any questions about food will get the response "Pickled eggs are a ha'penny". 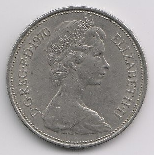 Shag pile carpet, flock wallpaper and fluffy bar towels make this a furry paradise.  The barman will be happy enough though, as he's been sampling the pub's wares for most of the day.  Only one beer will be on draught - Whitney's Red Trophy, a keg "bitter" of uncertain quality.  No matter, because if your stomach expands too much from the carbon dioxide, the place will have a large selection of small bottles of ale.  The exact age and alcohol content of these will not be mentioned as it makes the whole experience more interesting.  Customers are advised to wear eye protection as the 70s fashions worn by the actors are dazzling.  Other entertainments provided are an insecurely-fixed  dartboard surrounded by holes, and a pool table with a missing black and one intact cue.

Anyone know where to find suitable pubs and funding?   I'm sure I could be onto a winner here...