I've been on holiday.  You may have noticed the lack of posts here.  Or maybe you were grateful for my lack of snide remarks about Crafties and Beards. Anyway, when I wasn't being shouted at in Wales, making bizarrely incoherent whisky-laden speeches, or throwing up in my £125-per-night hotel room toilet, I was trundling around London visiting some local beer places.

The first place I went to was the Euston Tap, helpfully just round the corner from the aforementioned hotel room.  Just to prove I was not desperate for refreshment I waited a whole ten minutes after opening time before going in.  I bought a pint of the Finest Cask and, if any reminder were needed, it told me I was not in the North any more. 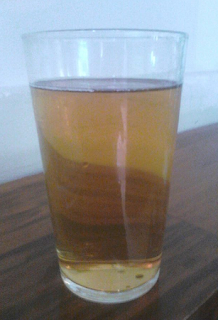 I sipped my headless pint slowly, as my other hotel in Islington wasn't due to be checked into until 2pm.  I sat there and watched the intermittent rain and Swedish tourists while listening to the 60s girl group music playing over the speakers. Sadly, the barstaff were about 20 and had to ask me who the "mad producer who shot someone" was.  Given the playlist, I said Phil Spector.  They seemed satisfied, probably as they didn't know the Dixie Cups tracks playing were modern re-recordings.

After finding the Northern Line closed, I walked to my hotel, dumped the suitcase and headed off to BrewDog Camden.  This took me half an hour.  Still, it wasn't raining by now.   I found it easily enough.  It's not like you could miss the place.

I looked at the price list and was pleasantly surprised.  I had heard all kinds of horrible things about beer prices in London and the cost of BrewDog, and was expecting Punk IPA to be £6 a pint.   I went up to the compulsorily-bearded barman and ordered a half to settle my nerves.  I sat at an industrial themed table (concrete and girders) and looked around.  "It's not often," I thought "that I'm the oldest person in a pub." 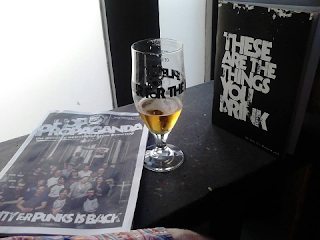 Glancing through their characteristically restrained and subtle literature, I began to get the place's ethos.  Basically, if the Scientologists were to run a brewery and craft beer bar chain, this is what it would be like.  The proselytising about the one true way of craft.  The stinging denunciations of other brewers, depicted as both evil and banal.  The proclamations that Messrs. Watt and Dickie will save us all with their selection of hop and malt based beverages.  I have to say the beer was good, though.

I wondered who would be more offended - CAMRA, for one of their members entering the Den of Evil Keg, or BrewDog themselves for being infiltrated by a late-thirtysomething Beard.  The staff weren't complaining though.  Especially when I spent £27 on bottles to take back home to the craft-free land of Thwaites Wainwright.

Still, there was plenty of fun to be had.  Mainly by taunting my local craft beer barman friends with pictures of BrewDog Camden's tube-based beer/hop infusion device.  "You wouldn't like this place." I texted as I sipped my half of 7.2% Jackhammer. 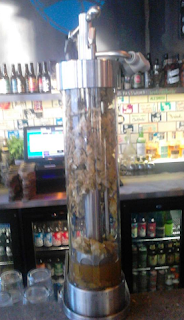 I would go again to BrewDog, despite my reservations.  Just maybe at a less crowded and noisy time.  And maybe fewer hipsters.  A vain hope, probably, in Camden.