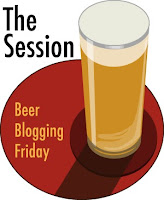 The hit-garnering antics of the The Session continue with the latest entry - Is Craft Beer A Bubble?

While this does conjure up some amusing images, I presume they mean the possibility that 'craft beer' is, at the moment, fashionable but may not be so forever.

At the moment, it seems that every man and his ironically-bearded dog are starting their own craft brewery, while pubs are disappearing from the UK like Rolf Harris's future career.  The question is, at what point in the future will these events meet in the middle?  Will there one day even be more breweries than actual pubs?

Craft beer is, of course, a growing industry.  To whom it is growing to is another thing. A look at the list of BrewDog's bars is a good indicator as any where it's most popular at the moment.  In the main, these are urban enclaves with a reasonably large amount of fashion-conscious and wealthy young people. And Nottingham.  I went to BrewDog Camden myself a couple of months back, and it was certainly busy for a Sunday evening.  I was probably also one of the oldest people there.  I am 37.
Craft Beer, at the moment, is aimed and priced at a certain type of consumer.  Presumably the rest prefer or are seen to prefer swigging their Boring Brown Beer or CorporoCarbonated lager-type beverages.  You will struggle to find Craft in any town that isn't fashionable.  I doubt there will ever be a BrewDog Stoke or a BrewDog Barnsley.  Even Lancaster, a city with a major university, only has two places that can reasonably be described as "Craft Beer Bars".

What happens to Craft Beer after this is anyone's guess.  Apparently, Wetherspoon's are starting to stock Craft.  This is an interesting move, and we'll have to wait and see if it expands.  It could be that regular drinkers are desperate for something better than John Smith's or Becks.  Or, on the other hand, they could be quite content with their regular drinks and see Craft Beer as poncy and pretentious.

As Zhou Enlai said about the consequences of The French Revolution, it is too early to tell.  I can't see a major brewery elimination disaster, as surely the crappy economy of the UK would have finished a lot off already had things been that bad.  Beer volumes are of course declining, but perhaps the profitability of what beer is sold is increasing?  Who knows.

The Crafties will always have their Craft.  It remains to be seen if anyone else wants it.
Posted by Lizard Seer at 13:55