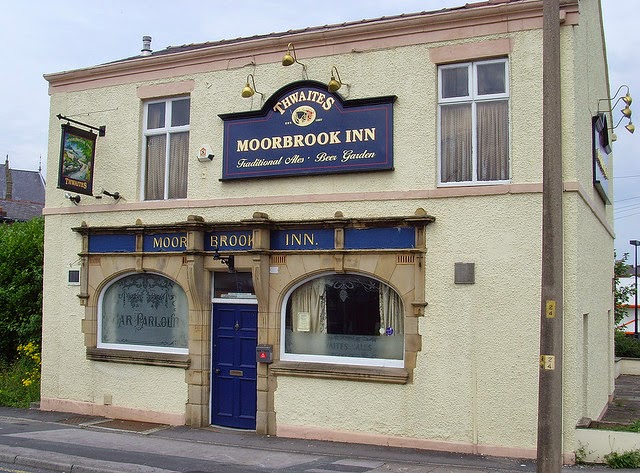 Not many pubs close and then reopen in the 2010s. I assume it's far more remunerative to sell them off for development, or just demolish and flog the land. Surprisingly, though, one such pub which this hasn't happened to is The Moorbrook, just outside Preston's city centre.

After spending what I presume to be a not inconsiderable sum on the Lamb & Packet and The Sun, Thwaites seem the have thought this particular pub as surplus to requirements (as they do with a lot of other things, apparently). So, it went up for auction. And, as you'll be surprised to hear, it was bought by "developers".

This is where the tale gets peculiar. For whatever reason, the developers backed out, and as such The Moorbrook went to the second-highest bidder, the people behind Preston's celebrated venues The Continental and The Ferret. Naturally, they wanted to keep it as a pub.

So. The Moorbrook has spent the last three months being refurbished as a crafty place. If nothing else, it saves money as, due to Thwaites policy of neglect, it came mostly ready-distressed. In fact, even when the place had only been open an hour, I saw the brass footbar hadn't been polished.  You can never tell with these refurbishments what exactly is original or been carefully installed.  Welsh Dresser-like display for the spirits behind the bar? Could be original, I suppose. Knackered looking chairs and stools? Were they inherited from the previous owners, or selected for their dishevelled qualities at a furniture clearance?  One thing I certainly know - the blackboards are new.
And the beer? Well, you can tell they've been aiming for those of the Crafty persuasion as Darkstar Hophead was on the pumps. While they have Thatcher's cider on, there's no Foster's or Strongbow. Thwaites Original is a permanent fixture, presumably as a sop to any of its previous clientele who decide to wander in.  Tellingly, they have a Craft Keg IPA. Best of all, though, on opening day, Thornbridge Jaipur was on sale. At £3.30 a pint - a good 80p less than anywhere else (excepting Spoons) I've seen it.
All in all, the refurbished Moorbrook is a work in progress, which is fair enough on its opening day. The place is in a peculiar location (smack in the middle of a retail park just off the A6) with little passing foot trade, and its signs are obviously the old Thwaites ones painted/masking taped over. The bottle selection may need some improvement, but I suspect they're limited by fridge space. But as central Preston's only craft beer place, it's a welcome development.

It's not replaced The Tap House in my affections, but it's good to have somewhere to go in town where the beer is reasonably good and isn't a cavernous hellhole or a dismally decorated dive. And they're on the same bus route even....
Posted by Lizard Seer at 11:33