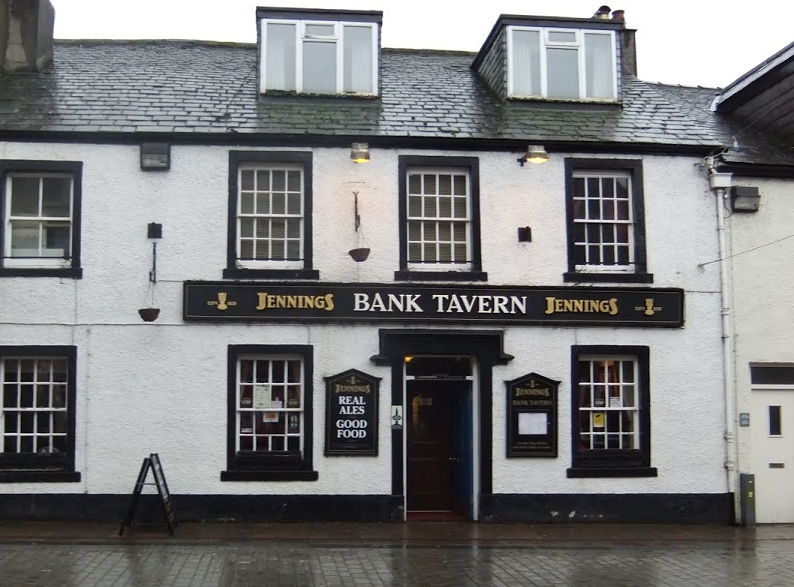 I had a few days off recently, and bought a bus ticket that gave me unlimited travel around the North West for £26.70. "Where," I wondered "is the furthest place I can go without changing buses?".  I like to get my money's worth, so I looked it up.  Keswick, Number 555 from Lancaster, three hours.  So that was that.  There's bound to be something there, I imagined.

So, I eventually got there around 1230, the bus stopping and starting every so often to disgorge and consume the hordes of elderly trippers.  I went to the local Booths to see what they had on different from mine back in Preston.  After that, and realising I had 45 minutes until the bus back turned up, I decided to go for a pint.

I had heard that Lakes towns are a decent beer desert.  Despite the county having more microbreweries than any other, 80% of the pubs are owned by Marstons (and branded as Jennings, of course). The locals are apparently happy with enough Jennings Bitter and Cumberland to fill Derwent Water, and the tourists really don't know any different.  Walking up the high street (eventually, as it appeared to be market day), I counted 7 Jennings pubs, 1 Robinsons and a "Free House" that was blaring music through open windows.  "Christ, I'm glad I don't live here. What with all this tourist tat and crap beer, I'd've gone on some kind of rampage within weeks."

But things, apparently, are about to change in Keswick's dismal on-trade closed shop.  Yes, Timbo Martin has been on the move again, and he's bought the recently closed police station to turn it into a Wetherspoons.  I don't often say this, but Keswick is a place which can only be improved by adding a Spoons to it.  Even if the beer turns out to to be crap, at least it won't be Jennings and won't be £3.70 a pint.

Certain sections of the community do not approve of these happenings.  The usual complaints.  Noise.  Disruption.  Drunks in the streets.  All completely specious of course.  Seeing as the populace of  Keswick appears to be little more than codgers on walking holidays, and those that service their wants and needs, I would reckon that the potential for alcohol-fuelled disorder is limited.  I'm guessing what they most fear is Timbo's Discount Bandwagon exposing the fact that the hostelries and eateries of Keswick have been fleecing tourists with high prices for years.

Yes, more alcohol will probably be sold.  Let's face it, how much 3.5% Jennings would you drink if you were charged Keswick prices?  The alcohol sales would be to people such as I, who are in town for the day and want a decent pint for a reasonable price.  And if a few pubs have to close, well, sorry for the job losses and all, but that's the price of complacency.  If you run a town as a pub fiefdom, expect interlopers to come and undercut you eventually.

I doubt I'll be going back to Keswick any time soon.  It's crowded with tourist nonsense and there's very little else.  But it's good to know that it's dire beer situation will soon be improving.
Posted by Lizard Seer at 04:10