This is my attempt at one of those "foodie" posts that beer bloggers make to make it look as though they're not bizarre drunks express their culinary prowess and show they're not one-dimensional as far as degustation goes.

It's my parents' 40th wedding anniversary in a year.  And what better thing to do than lay-on a 70s-style buffet to take them back to their youth.  But where do you find such...umm...interesting recipes?  Fanny Cradock was notorious for such over-decorated, garishly coloured and pretentiously named creations, and thankfully someone else is going through her works so I can see the results without having to try them myself first.

I saw a photo on Flickr, and decided to attempt the dish myself.  As far as I know it has no name, but I (and Google Translate) call it "Oeufs bleus avec mayonnaise à la moutarde et le poivre de Cayenne" 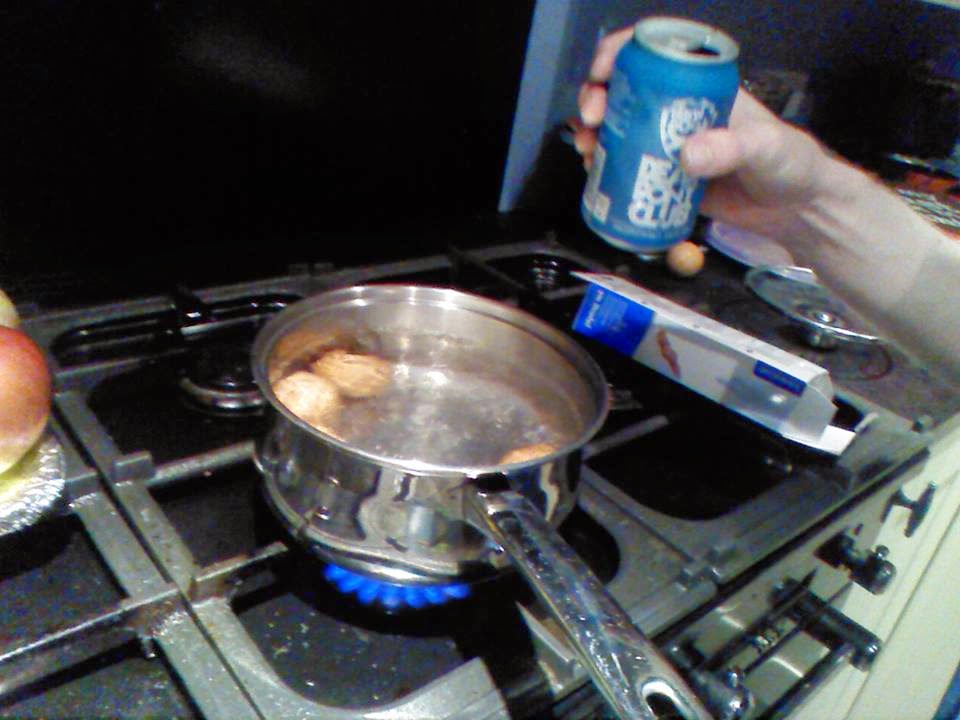 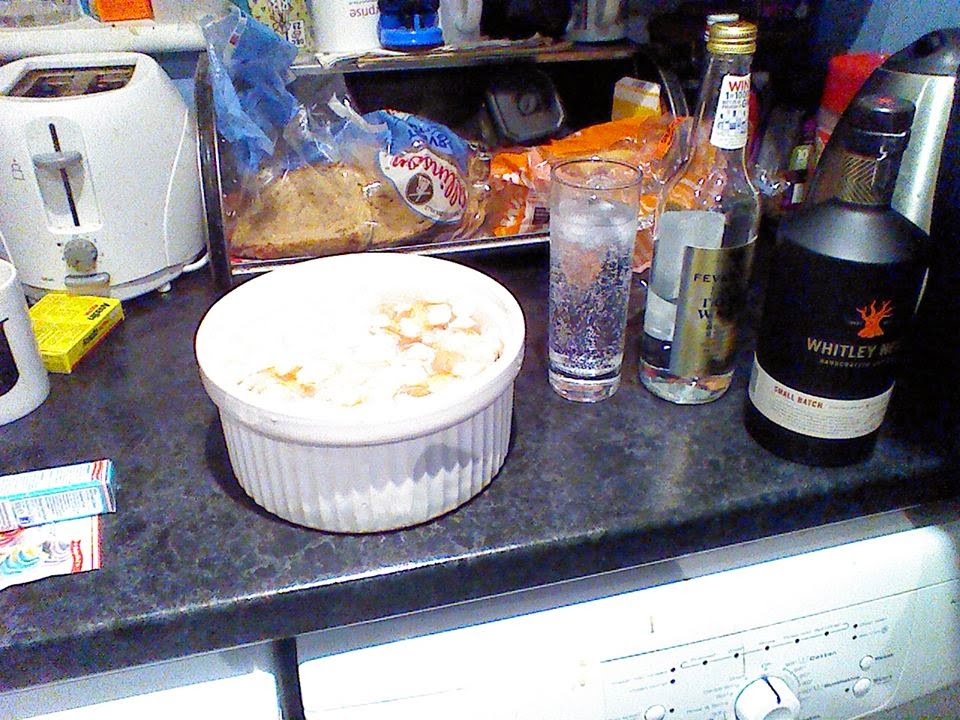 Cool eggs in ice water bath. Use any excess ice for a large gin and tonic. 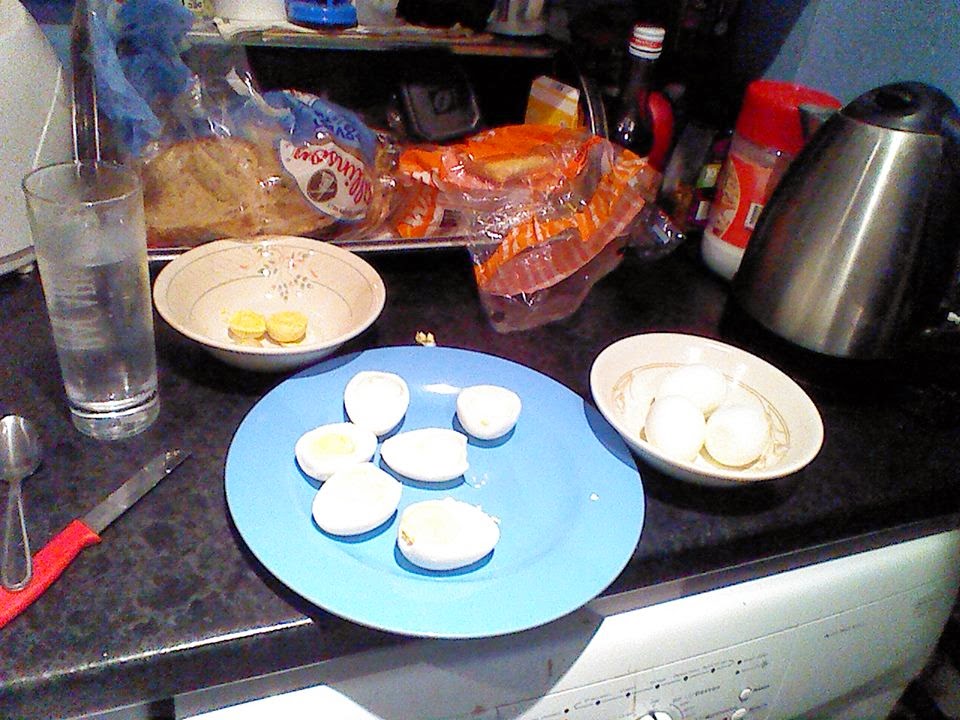 Shell eggs and cut in half. Put yolks on a separate bowl. Be careful not to get bits of shell or yolk in G&T. 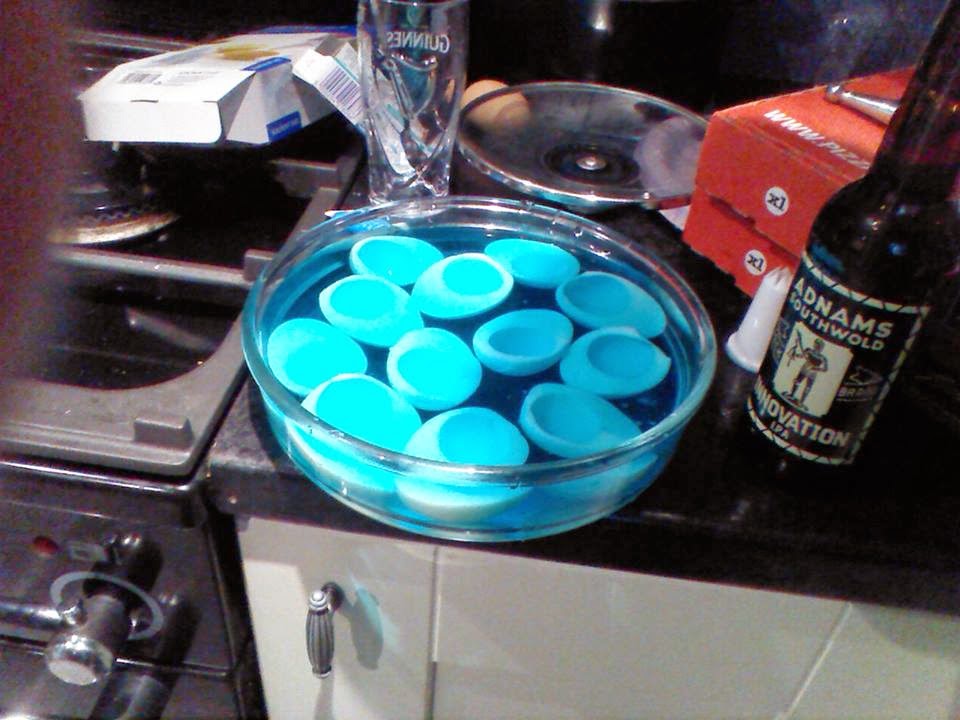 Put eggs in blue coloured water. Have an Adnams Innovation while you're waiting for them to blue up. 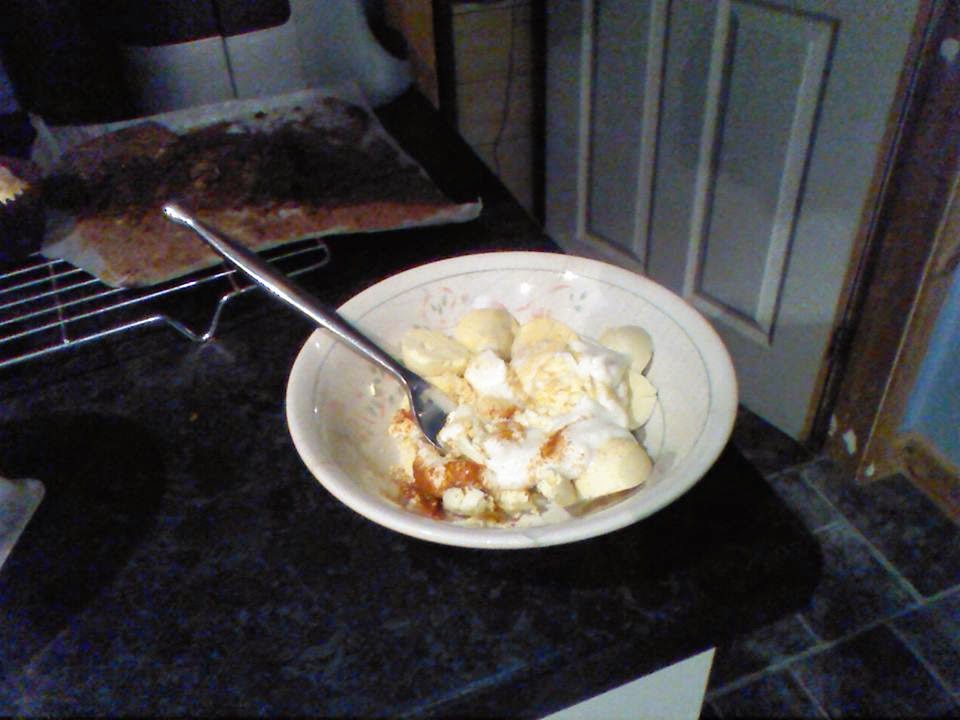 Mix up yolks, Mayo, cayenne pepper, mustard and salt until creamy. Best put the drinks down too. 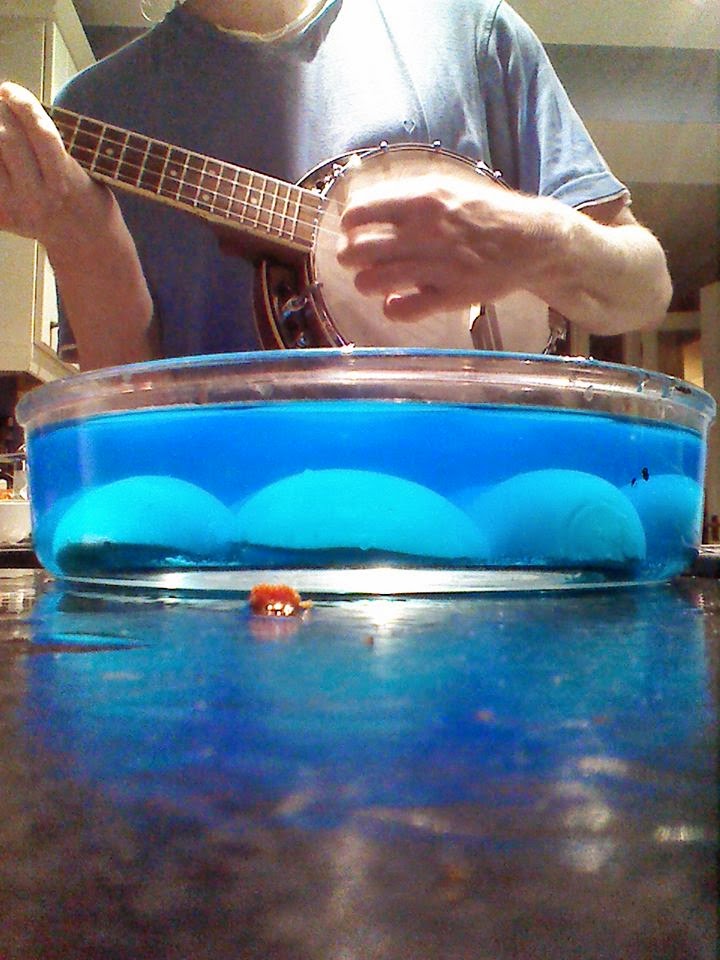 If you find they're still not blue enough after 45 mins, play the ukulele at them until they are. 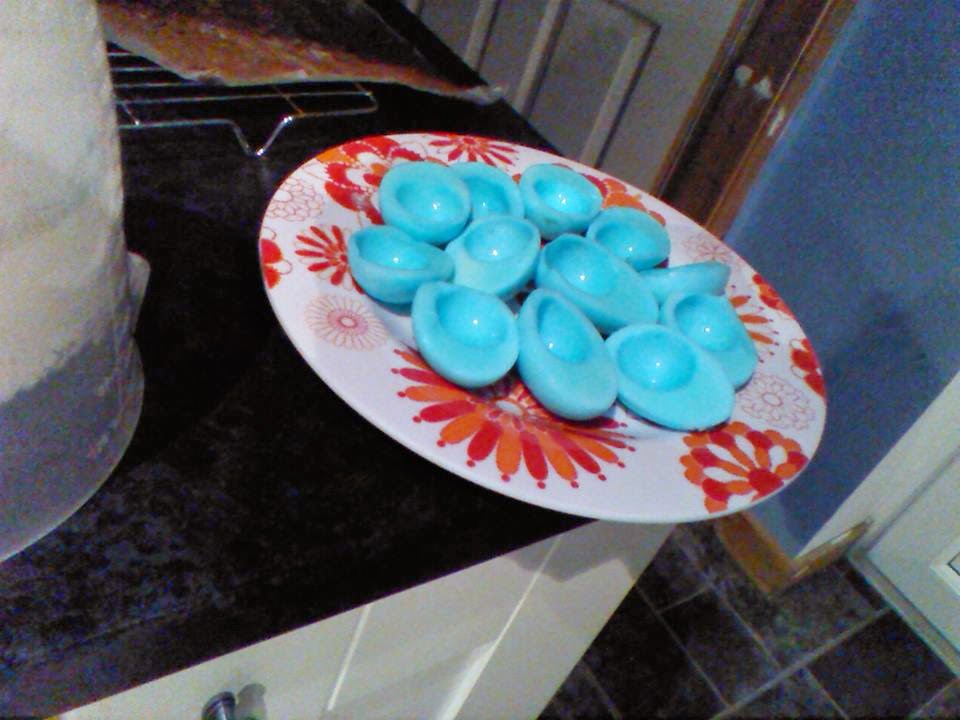 As blue as they'll get. Celebrate with another Dead Pony Club. 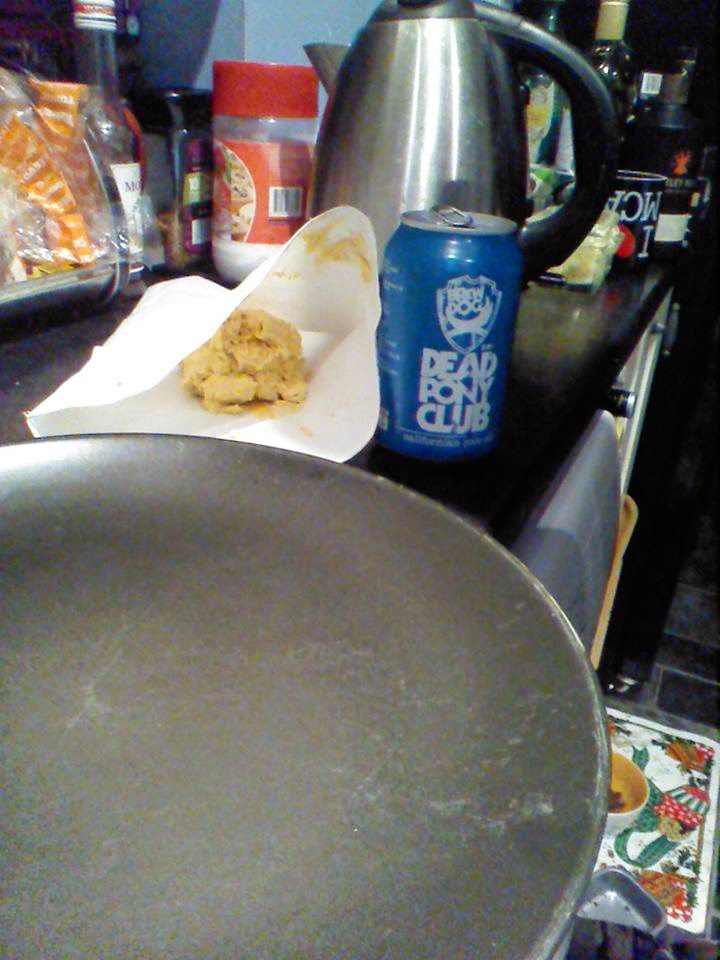 Stick all the yolk Mayo stuff into the piping bag and finish off the Dead Pony. 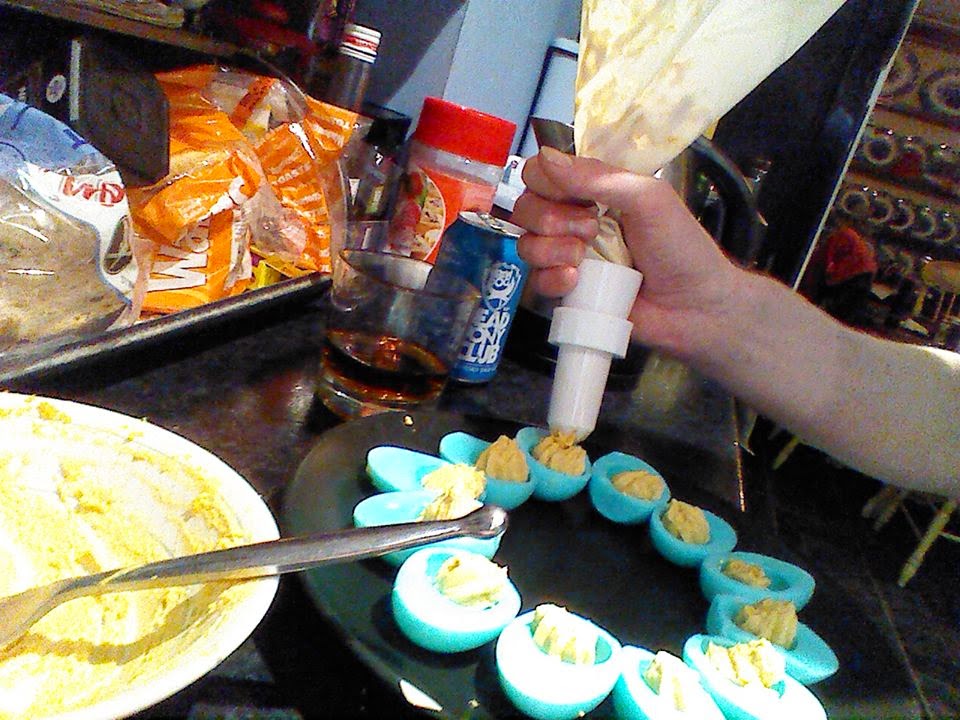 Pipe the mixture into the blue egg halves. Make sure you have a double whisky available to steady your hands and nerves. 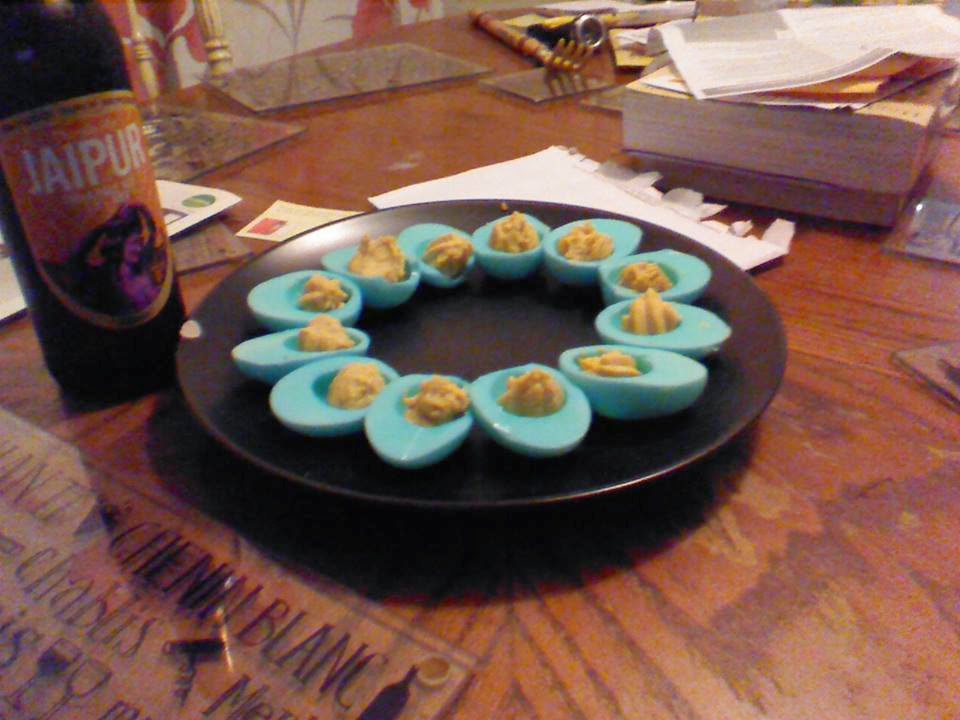 And there you have it. Blue Evil Eggs. Thornbridge Jaipur garnish optional.

Thankfully, you'll now be so drunk that this will look like a good meal.

To be honest, I didn't really like the texture of these much. Needs to go with something crunchy to offset the slight rubbery nature of the eggs and the gloopiness of the filling.  But they'd  look perfectly at home in a gaudy technicolor 70s buffet.  Thankfully, Fanny Cradock is now dead, and cannot eviscerate me in public for poor piping technique.  Next stop - Green Mashed Potato!
Posted by Lizard Seer at 14:56