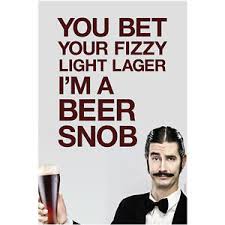 A human being has many needs. The need to sate hunger, slake thirst, satisfy sexual urges, and most importantly finding somebody, anybody to look down on.

As someone who is, to put it mildly, at some distance from rest of human society, I see it pretty much everywhere. I've often been the victim of it myself, obviously different as I am. Oddly, the places snobbery seems most prevalent are those that must trumpet their open-mindedness and inclusivity.

Down the years, I've seen many instances of sneering elitism at the trendier end of the beer fan spectrum. The blanket dismissal of cask ale as "boring brown bitter", the deigning of certain populist pub chain as hangouts for the plebs, and of the drinker of " insufficiently Craft" beers as dupes of big business.

This school of thought reaches its apogee in this blog post from an Awesome Beer Curator in London, where he sees a beer brewed by one of his top faves in a Wetherspoons, and slags off the general public for probably not knowing who the brewer is or how good his other beers are.

I can only assume this is because Crafty Beer Fandom is mostly populated by middle-class and University educated people in their mid twenties. People of this background have, since the age of sixteen or so, usually only ever had extended exposure to people just like them . This produces a feedback loop of mutually reinforcing views and behaviours, meaning they can be as condescending as they wish to those who they consider inferior without any risk of real comeback.

So, instead of seeing things they don't like as things to be tolerated, ignored, or avoided, they see them as Problems that must Be Solved.  In practice this means retreating to the local Crafty Bar, and blogging and tweeting about the Right People And Things to your mates to the exclusion of much else. Except to vehemently disagree with it.

I can live with this. As I found out gradually, people don't stay in their mid twenties forever and eventually grow up. Who knows, one day they may even end up like me.

I hope this blog is an antidote to snobbery. I'm fair, as I slag off everyone.