I'm celebration of the 70th Anniversary of the Dambusters raid (which round this way seems to be an excuse for Thwaites to promote Lancaster Bomber), I'm posting this old Carling Black Label ad (why did they drop the "Black Label"?  Was it what Bass thought was a "premium indicator" that this regular lout was undeserving of?).  If you were reading the popular press back then, the cliche was that German holidaymakers monopolised the sunbeds in Spanish resorts by getting up early and putting their towels on them.  The Brit Carling drinker here (who, of course,  hasn't even left his room) uses a famous tactic from "Britain's Finest Hour" to reserve his lager-swilling spot by the pool.

As far as early 90s Europhobia goes, this isn't actually all that bad.  My parents read The Sun, and the front page of that paper was inciting its readers to protest the EC at designated sites and shout "Up Yours, Delors!".  If they didn't, apparently, we would end up eating frogs legs and bratwurst for breakfast, and the great British cucumber would be abolished.  Or something. 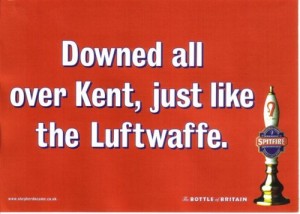