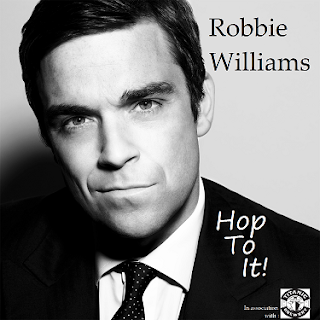 Due to the recent success of Frederic Robinson's Elbow and Iron Maiden beers, it seems breweries are queuing up to get all manner of musical fools into their brewhouse to wield the mash paddle.  Contrarian popster Robbie Williams, however, has done it the other way.  He's invited brewers from his home town to help make his new single.

"I've always had a great regard for the people of Burslem," he said "despite hardly ever having been back there since I left in 1991.  I was sat bored in the studio wondering which thing to become addicted to next when I thought 'Yeah, I'll invite the Titanic Brewery boys to come and work on my new song. Can't turn out any worse than Rock DJ anyway'.  My people got on the phone to them and they were up for a trip to LA, saying something about it beating being stuck on the A500 with a vanload of empty casks."

Titanic Chairman Keith Bott took time out of his busy schedule of selling nitrokeg stout to London freehouses to talk to us.  "We got off the plane at LAX, jetlagged and starving as the airline didn't have any oatcakes on board, and a limo whisked us off to Robbie's studio.  Things were slightly awkward at first, but we soon got talking about UFOs, especially the time when aliens abducted the fruits we were going to use for a batch of Plum Porter.  Had to use essence in the end.  Anyway, Robbie had laid down most of the track already but we put some backing vocals on.  You could almost hear them in the finished mix!  We were so glad to be a part of the creative process."

"Hop To It!", the result of this unique collaboration will be on sale in June in Titanic's seven North Staffordshire pubs, before being ground up and sent to China for road aggregate filler.


(All information in this post is entirely fictional, as I hope you know)
Posted by Lizard Seer at 17:23